Since coming to the US from Colombia in 1984, Javier Castaño has established himself as a preeminent editor, working his way to the top editorial positions at the best Spanish-language newspapers in New York City.

Now, along with fellow Latino journalists, he’s looking to the future of the industry. But more on that in a second.

After earning his master’s degree at the Columbia University School of Journalism, Castaño climbed up the masthead to become managing editor of El Diario La Prensa and editor-in-chief of Hoy – two of the biggest Spanish-language newspapers in the NYC-area. After a career in print, he’s currently diving into multimedia journalism with his own online newspaper, QueensLatino.com, which provides bilingual digital content and is printed monthly. 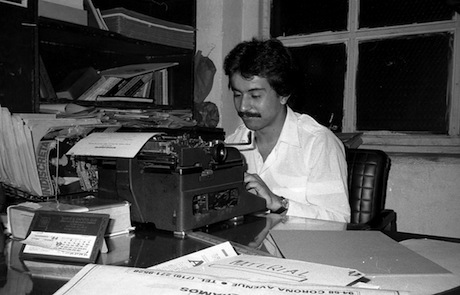 Castaño working as the editor of Noticiero Colombiano in 1984, his first job in the US after emigrating from Bogota, Colombia.

Castaño is also an adjunct professor at Hofstra University, where he teaches journalism. Together with other communications professors at Hofstra, he saw a need for a partnership between the School of Communications and local Spanish-language media outlets. Their vision was made into reality with Hofstra’s first Latino Media Conference, which featured workshops on starting a successful blog, integrating social media, and editing video footage.

This year’s conference—on Saturday, October 15—is more ideological, Castaño says, and geared toward encouraging civic participation by connecting media outlets with community organizations that serve Latinos. In his words, it’s more about “a progressive approach to the news.” 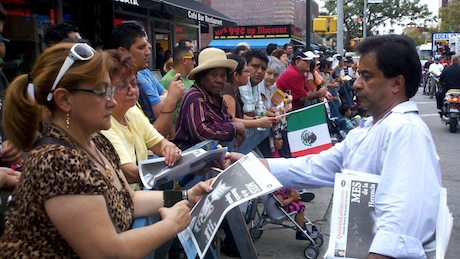 Castaño passes out print copies of QueensLatino at the Queens Hispanic Day Parade in Jackson Heights this September.

Listen to Castaño speak about the Latino Media Conference II, which will take place at Hofstra University’s Breslin and Dempster Halls from 8am-5pm on October 15. The event is free and open to the public.