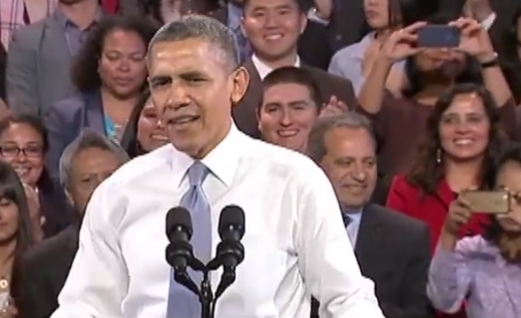 President Obama has been an ardent supporter for comprehensive immigration reform, remaining steadfast in his push throughout the past several months, despite opposition and difficulties in the House of Representatives.

He spoke in San Francisco on Monday calling on House Republicans to act on this issue.

“The only thing stopping us is the unwillingness of certain Republicans in Congress to catch up with the rest of the country,” Obama said. He noted that House Speaker John Boehner has recently opened the door to a piece-by-piece process on immigration reform. “I believe the Speaker is sincere,” Obama said.

At one point, President Obama was interrupted by Ju Hong, a 24-year-old immigrant rights activist and student at San Francisco State, who told Obama that his family has been separated for 19 years because of our nation’s broken immigration laws – and called on Obama to pass an executive order halting all deportations.

“You have the power to stop deportations for all,” Hong said.

“Actually, I don’t. And that’s why we’re here,” Obama replied.

Obama added that he can’t simply halt deportations by executive action, although he did do so for undocumented young people who entered the U.S. as children with the Deferred Action for Childhood Arrivals program.

“I respect the passion of these young people because they feel deeply about the concerns for their families. If in fact I could solve all of these problems without passing laws in Congress, then I would do so,” he said. “But we’re also a nation of laws. That’s part of our tradition.”

The full video of the speech is above, courtesy of the New York Times.