The next time you wonder why your electric bill is so expensive, be thankful, because had it not been for the discoveries of Nikola Tesla, you could be paying even more for each kilowatt-hour. 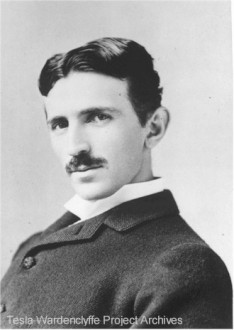 Born in 1856 in what is known today as Croatia, Nikola Tesla was a Serbian-American scientist and inventor. Tesla immigrated to New York in 1884, after working for several years at Thomas Edison’s Continental Edison Company. By 1891, Tesla received his American citizenship, and was so proud of that achievement that he reportedly told his closest friends that he valued his American citizenship above his many scientific accomplishments.

In the “War of Currents” in the late 1800s, Thomas Edison was the champion of direct current (DC), the type of electric current produced by batteries and fuel cells. As a distributive mechanism of electricity, the direct current is an unwieldy and inefficient method, as it couldn’t transmit electricity over long distances and required a power plant every square mile.

Tesla (with financial backing from George Westinghouse) proved that alternating current (AC) was a more reliable and efficient method of distributing power to people’s homes, as it used thinner wires, higher voltages and could transmit electricity over long distances. To this day, it continues to be used across the world as the standard for electric distribution. 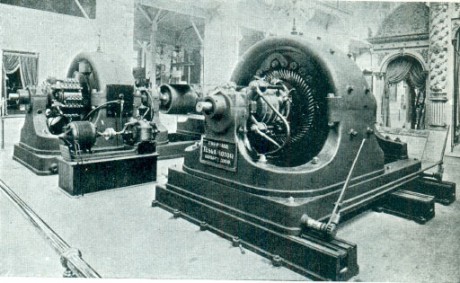 The “War of Currents” wasn’t the first clash between Edison and Tesla. Today, Edison has become a larger-than-life folk hero in the eyes of many. But unlike Tesla, he wasn’t an inventor motivated by the love of creating, but rather, he was a great businessman more concerned with profit than progress.

Tesla began his career working for Edison in France and later in New York. It is said that the beginning of their long-standing feud began when Tesla claimed he could redesign Edison’s motors to make them more efficient. Edison countered by saying he would give Tesla $50,000 ($1.25 million today) if he could do it. Much to Edison’s chagrin, Tesla successfully redesigned the motors, but Edison, famous for being stingy, replied to Tesla, “You don’t understand our American humor.”

Tesla left shortly after the misunderstanding and went on to create his own company, Tesla Electric Light and Manufacturing.

We owe a lot to Nikola Tesla, but it doesn’t just stop at alternating current. At the time of his death, Tesla had around 300 patents around the world in his name and hundreds of ideas that led to invaluable products we use every day, such as radio, radar, remote controllers, electric motors, and hydro-electric power. In fact, Niagara Falls is home to the world’s first hydro-electric power plant, designed and built by Tesla. A statue stands there today in his honor.

Not only was Nikola Tesla a genius inventor, but he was an idealist as well. Instead of seeing his inventions as profitable enterprises, Tesla wanted to improve the world for everyone, which led to one of his largest and most ambitious endeavors, Wardenclyffe, located right here on Long Island. 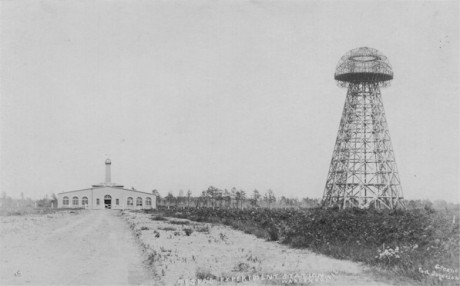 Wardenclyffe Laboratory sits on Route 25A in the village of Shoreham in Brookhaven. In 1901, with financial backing from J.P. Morgan, Tesla purchased 200 acres of land from James Warden, a lawyer and banker. Tesla’s grand vision for Wardenclyffe was a tower that could transmit free wireless electricity for the world to use.

Dubbed “Radio City”, Tesla envisioned a hub of broadcasting, which would employ thousands. While Shoreham did see some development in the area surrounding Wardenclyffe, the idyllic vision of Radio City was plagued by money troubles after J.P. Morgan refused to provide further financial assistance, citing the inability to profit from the enterprise.

In an effort to reinvigorate interest, Tesla provided a demonstration in July 1903. The New York Sun reported,

Tesla’s Flashes Startling, but he won’t tell what he is trying for at Wardenclyffe. Natives hereabouts are intensely interested in the nightly electrical display shown from the tall tower where Nikola is conducting his experiments in wireless telegraph and telephony. All sorts of lightning were flashed from the tall tower and poles last night. For a time, the air was filled with blinding streaks of electricity, which seemed to shoot off into the darkness on some mysterious errand. When interviewed, Tesla said “The people about there, had they been awake instead of sleep, at other times would have seen even stranger things. Some day, but not at this time, I shall make an announcement of something that I never once dreamed of!”

While dramatic, the demonstration failed to invite the support Tesla had hoped for, and his lack of business acumen contributed to the eventual failure of Wardenclyffe. By 1905, public opinion had turned against him, his financial reserves had been exhausted and most of the site had to be shut down. Wardenclyffe was shortly abandoned, leaving Tesla in financial ruin.

Despite his failure, Tesla continued working and envisioning astonishing advances, but Tesla’s health, both mental and physical, began to unravel. Tesla eventually died destitute and penniless in his room at the New Yorker Hotel in 1943.

Today, Tesla has become somewhat of a cult figure on the internet, which is fitting since we may not have an internet today without many of his ideas.

Wardenclyffe is the only laboratory of Tesla’s still standing in some capacity today. In 1917, the U.S. government destroyed the tower in a misguided attempt to defend against German U-boats. The grounds and buildings were later sold.

Recently, the site was put up for sale once again. An organization devoted to celebrating and preserving Tesla’s legacy, Tesla Science Center at Wardenclyffe, (formerly known as Friends of Science East, Inc.) wanted to buy the property and create a museum dedicated to Tesla. Through the power of the internet, the non-profit was aided by a web comic called The Oatmeal, run by Matthew Inman.

In August 2012, Inman ran an Indiegogo crowdfunding campaign with the Tesla Science Center called “Operation Let’s Build A Goddamn Tesla Museum,” and in less than a week, the crowdfunded campaign met its $850,000 goal. By the second week it had surpassed $1 million. 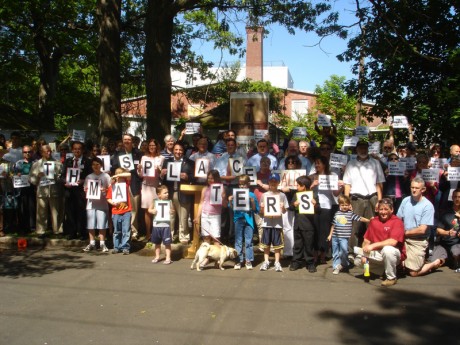 Community members on May 30, 2009, rally at Wardenclyffe in support of its preservation.

Thanks to their efforts, the Tesla Science Center at Wardenclyffe will soon be a reality, bringing life to the site of one of Nikola Tesla’s greatest ventures.

Nikola Tesla was a man of great intellect and vision. Tesla envisioned a world of poetry and justice fueled by the wonder of electricity.

Electrical science has revealed to us the true nature of light, has provided us with innumerable appliances and instruments of precision…added to the exactness of our knowledge…attracted the attention and enlisted the energies of the artist; for where is there a field in which his God-given powers would be of a greater benefit to his fellow-men than this unexplored, almost virgin, region, where like in a silent forest, a thousand voices respond to every call?

Tesla left a legacy of discovery, achievement and wonder. He has been honored by fans in a multitude of ways, from a statue at Niagara Falls, to the new Silicon Valley electric car company, to the .gifs of Tumblr. But the one tribute that Tesla himself would most appreciate is his name and image on display at the Statue of Liberty, as a reminder to all of what the United States stands for.