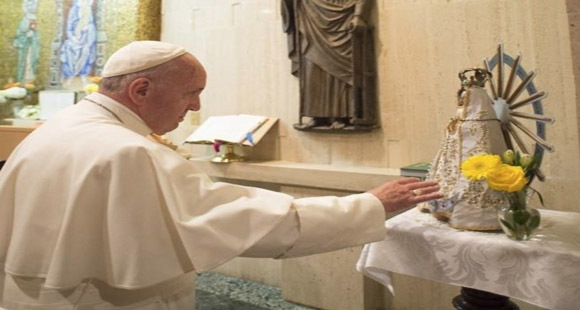 During his second day in the United States, Pope Francis delivered a message about acceptance and compassion for immigrants and their families.

He attended an official welcoming ceremony held in the South Lawn of the White House Wednesday morning, in front of some 20 thousand people.

President Obama welcomed him by saying that “the spirit of today’s gathering is just a small reflection of the deep devotion to some seventy million American Catholics.”

“The excitement around your visit must be attributed not only to your role as Pope, but to your unique qualities as a person,” the President said.

Pope Francis began his speech highlighting both, the importance of immigrant families in the U.S. and the rejection of any kind of discrimination.

“As a son of an immigrant family, I am happy to be a guest in this country which was largely built by such families,” Pope Francis said. “Americans Catholics are committed to build a society which is truly tolerant and inclusive, to safeguarding the rights of individuals and communities, and to rejecting every form of unjust discrimination,” he said.

He later went to St. Matthews Cathedral in Washington D.C., Wednesday afternoon, and spoke to about 300 Bishops from across the country. Pope Francis encouraged Bishops to open their hearts to immigrant communities.

“No American Institution do more to immigrants than your Catholic Communities do,” Pope Francis said.

“Do not be afraid to welcome them,” the Pope said, referring to immigrants. “Offer them the warmth of the love of Christ and you will unlock the mystery of their heart.”

“These people (immigrants) will enrich America and its churches,” he said.

Pope Francis will address Congress this Thursday morning at 10:00 a.m. and immigration is expected to be part of his speech.

“I look forward on these days of encounter and dialogue in which I hope to listen and share many of the hopes and dreams of the Americans,” Pope Francis said at the White House.

“I will have the honor of addressing Congress where I hope as a brother of this country, to offer encouragement to those called to guide the nation’s political future in fidelity to its founding principles,” he said.