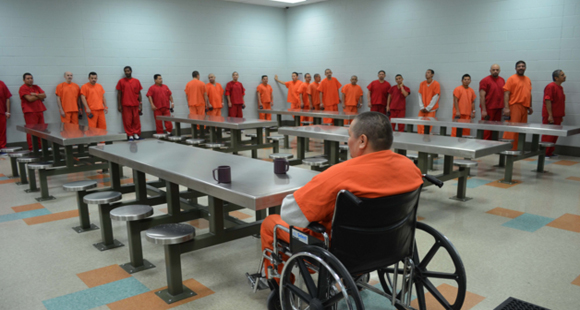 At least 56 individuals have died while in Immigration and Customs Enforcement’s (ICE) custody during the Obama administration, according to a new report released Thursday.

The report, “Fatal Neglect: How ICE Inspections Ignore Deaths in Detention,” focuses on eight deaths during a three-year period (2010 to 2012). Based on documentation from ICE investigations conducted after each death, obtained through a Freedom of Information Act request, the report shows that violations of ICE’s medical standards contributed to the deaths. More perniciously, additional research shows that ICE inspections of the detention facilities before and after these deaths failed to acknowledge, or sometimes dismissed, the substandard medical care.

“There is no guarantee that people detained by ICE will leave detention alive, even under Obama administration policies that sought to decrease the number of people who die in ICE custody,” said Mary Meg McCarthy, Executive Director of National Immigration Justice Center (NIJC). “ICE has a mandate to care for the people in their custody. If detention centers cannot deliver prompt and quality medical care, ICE must implement corrective actions for those facilities or terminate contracts with facilities that do not comply.”

Among the report findings:

– In nearly half of the 17 death reviews produced by ICE from 2010 to 2012, the documentation suggests that failure to comply with ICE medical standards contributed to deaths.
– Even in the eight cases where death reviews concluded that violations of ICE medical standards contributed to people’s deaths, ICE’s deficient inspections system essentially swept those findings under the rug.
– Three of the eight cases profiled led to wrongful death lawsuits by family members.
– Six deaths involving substandard care occurred at privately operated facilities.

The findings underscore how ICE’s deficient inspections system, first exposed by the NIJC and the Detention Watch Network (DWN) in the October 2015 report “Lives in Peril,” exacts a tragic human toll. ICE has repeatedly shown it is incapable of providing people in its custody the medical care they need and deserve, even failing to implement its own medical standards to prevent deaths. People experiencing medical or mental health emergencies should be released from custody and promptly referred to higher-level care.

“ICE’s inadequate responses to these deaths show the stark gap between the promise and the reality of the Obama administration’s immigration detention reform initiatives,” said Carl Takei, Staff Attorney at the National Prison Project of the American Civil Liberties Union (ACLU). “Instead of ignoring its own internal investigations, ICE must learn from its deadly errors. That means providing swift, quality medical care to those who need it, and overhauling the inspections process to stop more people from dying in detention. No family deserves to wonder if their loved one died a preventable death in ICE custody.”