A new survey from the Public Religion Research Institute finds substantial majority support for immigrants. The survey also finds that younger people are more sympathetic to immigrants. This is particularly true of young Republicans as compared to older Republicans.

One example of this is the difference between younger Republicans and their elders on the question of whether immigrants face discrimination in the United States. According to the report: 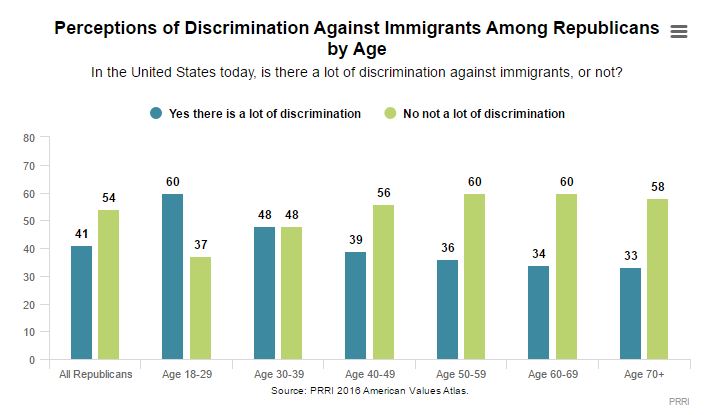 Among the general public there is a rising perception of discrimination against immigrants. According to the study:

The poll also found that popular support for a Pathway to Citizenship for the undocumented has not fallen in spite of President Trump’s repeated attacks on immigrants. According to the report:

Despite the contentious discourse around immigration issues, providing a path to citizenship for immigrants living in the U.S. illegally is the preferred policy of both Democrats and Republicans. However, Democrats express significantly stronger support than Republicans for allowing illegal immigrants to stay in the country legally. Three-quarters (75%) of Democrats say immigrants living in the country illegally should be granted a path to citizenship if they meet certain requirements, while a majority (55%) of Republicans say the same. Permanent legal residency is supported by relatively few Democrats (15%) and Republicans (13%), while deportation is a significantly more popular policy among Republicans (28%) than among Democrats (8%).

Younger Republicans, however, voice stronger support for legal status for illegal immigrants than those who are older. More than six in ten (62%) Republican young adults say immigrants living here illegally should be allowed to become citizens provided they meet certain requirements, compared to a slim majority (53%) of Republican seniors.