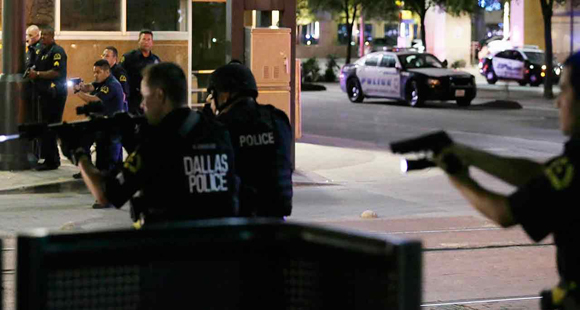 I was watching TV Thursday night. As usual, I was flipping between MSNBC and CNN to get the news. I was getting pretty disturbed by constantly watching the replays of the Minnesota and Baton Rouge shootings, so I turned on Fox which was showing demonstrations which were, strangely enough, more peaceful viewing. A few moments after I changed the channel the shootings began at the Dallas demonstrations. On live TV, right in front of me! How traumatic for the police and the marchers, for the families of the slain officers and their comrades. It was unbearably sad to see the police being gunned down. I am still trying to sort it out.

I was very disturbed to see one of the marchers carrying a long gun at the rally. He was not a shooter, but why are people carrying weapons at peaceful demonstrations? These weapons aren’t for politics, but for war. I am seeing more and more pictures of people with guns at all sorts of what should be peaceful events in places like Texas with open carry laws. Why the hell is anyone doing this for any rally at all? Are they going hunting?

Problems in the world that Americans care passionately about should stir up vigorous debate, but the trend over the last year has been towards increasingly virulent rhetoric and a language of violence. Couple that with laws that in some states allow just about anyone to buy a gun and carry it openly through the streets and you have a recipe for tragedy.

As the political killings mount, so does the rhetoric against immigrants, Muslims, the police, gays, Planned Parenthood and other groups.

We have seen abuses by police in our own communities in Suffolk County, even the former police chief there has gone to jail for beating a suspect. We all want accountability for incidents like the deadly shootings of black men in Baton Rouge and Minnesota. But rhetoric around this issue cannot demean or demonize police officers generally.

I have worked with refugees from civil wars for nearly four decades. Civil wars erupt when rhetoric takes a violent turn, when political opponents become political enemies, when politicians decide to harvest votes from hatred, gathering power over the corpses of the innocent, when gunplay becomes a form of political expression or when picket signs are replaced by long guns.

The first violent acts of a civil war often seem scattered and random. But each act sparks a retaliatory outrage. Soon military tactics are turned into an arm of political strategy.

The U.S. is not on the verge of a new Civil War, but it is manifesting the paroxysms of violence that so often lead to pre-war social and political breakdown.