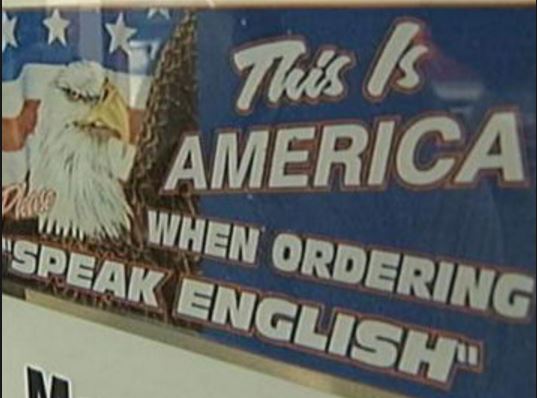 Long known as Philly’s racist cheesesteak joint, Geno’s Steaks has finally removed its English-only sign. The shop had signs implying that anyone who didn’t speak English would be deported and saying “This is America When Ordering Speak English.”

The cheesesteak was originated at Pat’s Cheesesteaks and perfected at Tony Luke’s, but a certain racist clientele frequented Geno’s, where they could be assured that they would see few Latinos. The “Speak English” sign was put up by owner Joey Vento in 2006 and was roundly condemned by human rights groups and clergy. When Vento died in 2011 he told his son Geno Vento to keep the sign up.

Anti-immigrant politicians have made Geno’s a campaign stop in their races to exploit hatred of Latinos among some white voters. Earlier this year one of the major party presidential nominees ate an “English-Only Sub” there. The shop has long been a rallying point for those opposed to racial equality.

Five years after Joey Vento’s death, the store finally surrendered to community pressure and took the xenophobic signs down.