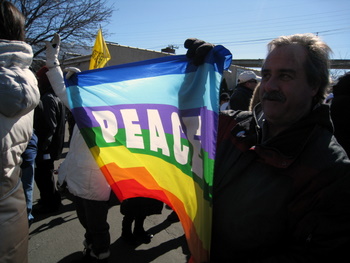 More than 100 people gathered in downtown Massapequa this morning for a peace vigil calling for Long Island Congressman Peter King to broaden a congressional investigation in homegrown terrorism. King supporters were also in attendance, if in slightly fewer numbers.

As the new head of the Homeland Security Committee in the House of Representatives, King plans to hold a series of investigative panels on the radicalization of Muslims in America. Despite opposition calls to broaden the scope of his investigation (including an editorial by Long Island Wins director Maryann Sinclair Slutsky), King has refused to change course.

While vigil attendees heard from religious leaders and sang folk songs, King supporters recited “God Bless America” and called for increased scrutiny of the Muslim community. One King backer shouted at the vigil-goers to “head back to the sand.”

Here are photos from the gathering. Scroll down to read quotes from attendees of the peace vigil, as well as from King supporters.

Voices from the peace vigil and the opposition:

Razi Siddiqui, Valley Stream, 60, civil engineer
“We all here are Americans. Don’t single out any one community. This is a country of pilgrims, people who have come here for peace.

Phil Heckler, Hicksville, 63, engineer
I have mixed emotions about being against it, because I think some good could come of these hearings. If he really listens to people, he’ll find out that some of our international policies, like support for dictators, have led to terrorism.

Bhupinder Singh Bhurji, chairman and CEO of the non-profit Namdhari Sikh Foundation
We are against the radical Islamist people, we are not against any one religion. He has been assigned to this job…we fully trust him.

Carol Gordon, Massapequa, 58, community activist
I think what he’s doing is unfair because he’s not treating everyone the same. Justice is not being served properly. He should make it inclusive, to look at all people.