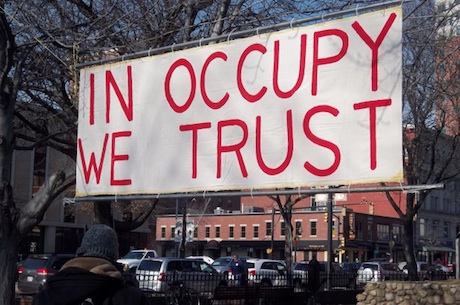 This year we are likely to see the most expensive presidential campaign in history, yet during my time at the New Hampshire primary this weekend I saw almost no enthusiasm for anyone running. I’ve been going to the primary every four years since 1980, and this year had the smallest crowds I’ve ever seen.

Immigration has not played as big a role in New Hampshire as it did in Iowa. Both states have almost no immigrants, but Iowa seemed to be in xenophobic panic that was not replicated in the Granite State. As far as I could see, Newt Gingrich was the only candidate who did outreach to the state’s small Latino population with Spanish-language literature and a meeting geared towards Latinos on Sunday.

Occupy the New Hampshire Primary drew larger crowds than some of the candidates.