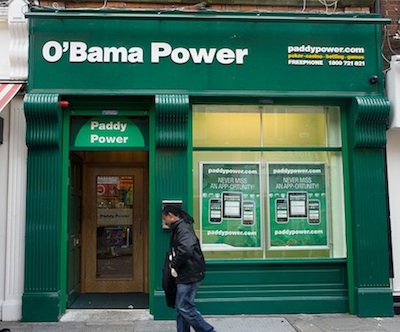 I was watching the news this morning when the anchor cut to a reporter covering President Obama’s visit to Ireland, referencing the president’s search for his genealogical roots on the Emerald Isle. Several people in the studio let out audible laughs.

A quarter century ago, another president, Ronald Reagan, visited Ireland, as well. He too was looking to connect with his roots there. No one laughed, even though Reagan’s nickname was “Dutch” not “Irish.”

The great abolitionist Frederick Douglass was never sure who his father was, but it was speculated at the time that Douglass was half Irish. He traveled to Ireland more than a decade before the Civil War and wrote of finally feeling at home:

I am covered with the soft, grey fog of the Emerald Isle [Ireland]. I breathe, and lo! the chattel [slave] becomes a man. I gaze around in vain for one who will question my equal humanity, claim me as his slave, or offer me an insult. I employ a cab – I am seated beside white people – I reach the hotel – I enter the same door – I am shown into the same parlour – I dine at the same table – and no one is offended… I find myself regarded and treated at every turn with the kindness and deference paid to white people. When I go to church, I am met by no upturned nose and scornful lip to tell me, ‘We don’t allow niggers in here!’

—My Bondage and My Freedom

You would be thought odd if you described Douglass as a Great Irish-American.

In 21st century America, it is apparently still funny when a man with a black face claims Irish heritage, but not when a Dutchman does.