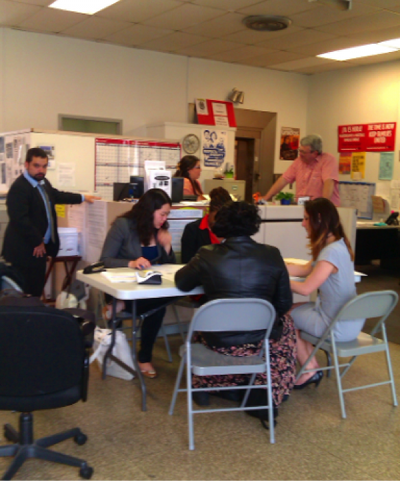 New York City Public Advocate Letitia James led a group of elected officials at a press conference this week urging President Barack Obama to clear the citizenship application backlog. More than half-a million immigrants who have applied for citizenship in hopes of voting in November have not had their cases adjudicated yet.  Nearly 60,000 of these live in the the New York City area.

Immigrants responded to the harsh anti-immigrant rhetoric of the current presidential campaign by applying for citizenship in large numbers. There was a 23% increase in citizenship applications over the last year. This should have been anticipated by the Department of Homeland Security, which was repeatedly warned to get ready for the influx of applicants by community organizations.

“This is not okay. The federal government must provide emergency support for the United States Citizenship and Immigration Services to process the maximum amount of applications possible in the coming days and weeks,” James told the New York Observer. “And if the federal government wants to partner with us in the City of New York, we are ready, willing and able to step up.”

With time running out soon to register to vote, immigrants who have jumped through all of the hoops to become citizens need the Federal government to do its job and intensify the effort to process citizenship applications.