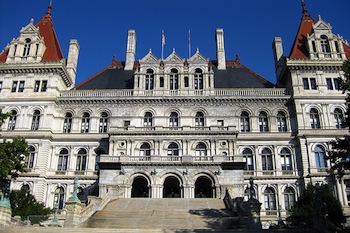 The New York State DREAM Act, which was first introduced in Albany a decade ago, passed in the State Senate for the first time ever. The act has repeatedly been approved in the Assembly, but had died each session in the Senate. The loss of control of the Senate in November by what had once been a thin Republican majority was the main factor in passage.

The NY DREAM Act will make all New York students eligible for the Tuition Assistance Program (TAP) no matter what their immigration status is. The act will help approximately 6,000 immigrant New Yorkers pursue their educations.

Steve Choi, Executive Director of the New York Immigration Coalition, told reporters that “This has been a long, hard road.” The Coalition was one of the leaders of the statewide effort to pass the bill. Leading the opposition to helping immigrants get an education was Long Island State Senator Ken Lavalle.

On Long Island, Lavalle’s anti-immigrant rhetoric was countered by Osman Canales and other immigrant students in the Long Island Immigrant Student Advocates (LIISA). Canales has been a tireless advocate, travelling to high schools, colleges, and houses of worship on Long Island to raise awareness of the legislation. Canales said last night that his work had introduced him to many fine people who took a position in favor of education for immigrants. He also was happy that the campaign for the DREAM Act drew in many young immigrants for their first experience with legislation. “Now they have won,” he told me.

Many other groups on Long Island worked for passage of the act including CARECEN, Empire Justice Center, and Catholic Charities.