On October 21, 1861, the Texas Confederate army began its move to conquer New Mexico by parading past the Alamo Mission in San Antonio. The mission was already a shrine to the triumph of white Southern slaveholding culture in the Southwest, as well as to the defeat of the Latinos who once held it. Now, the Confederate army hoped to win present-day Arizona and New Mexico for the new republic of slavery.

Under the command of General Henry Sibley, the army moved southwest to the Rio Grande, near what is now El Paso. In January 1862, the Confederate invasion of New Mexico began.

Among the Confederates marching west was Henry C. Wright , the son of English immigrants who himself had become an immigrant. Wright had been born in New York and raised on Long Island. When he was 16, his family moved to Texas. At a time when sectional identities were transformed into “nationalities,” Wright had to decide whether he was just a Northerner living in the South, or an immigrant to the Confederacy. The 21-year-old Long Islander would later write that “it took but a little while for my mind to grasp and appreciate the Southern ideas of state’s rights and the white man’s supremacy… So when… the state voted for secession, I was among the first to volunteer.”1

When he joined the Texas force in September 1861, Henry Wright completed his immigration to the Confederacy every bit as much as the Irish who, that same month, joined the Fighting 69th New York Volunteers and consummated their own naturalization as United States citizens. Wright had lived in the South, as something of an outsider, for half a decade. Through his enlistment, he ended his dual allegiance to the North, absorbed the central tenets of white Southern ideology, and decided to hazard his life with his Southern-born neighbors.2

As Henry Wright and 3,000 other Confederates mounted on their horses and moved into New Mexico, the roughly 1,500 Union troops under Col. Edward Canby wondered where the allegiances of the civilian Latino population would fall. They knew the civilians had grievances against the federal government and that Confederate agents had been active for months stirring up trouble. Tucson had already seceded from the Union, but that town was controlled by transplanted white Southerners. What the Latino Nuevomexicanos decided would prove decisive. 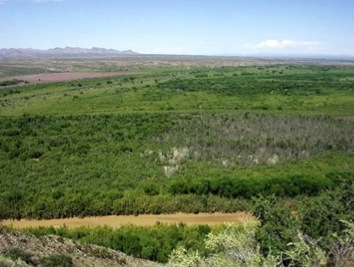 The Rio Grande Valley near Valverde, New Mexico. Much of the Confederate campaign in New Mexico took place within a few miles of the Rio Grande river, shown here in the foreground. (Click for source)

The territorial governor put out a call for volunteers to fight the invaders, and Unionists held their breath. The Union military commander Colonel Edward Canby worried that the Latino locals might use the invasion as an opportunity to try to throw off United States’ control of the territory. He wrote that the Nuevomexicanos had “no affections for the institutions of the United States.”3

Fears that the Nuevomexicanos would rise against the government or refuse to help the Union forces proved to be unfounded. One Union official wrote at the time of the call to arms that “The Mexicans have turned out with a spirit that is truly commendable.” While the untrained Nuevomexicanos militia and volunteers were hardly experienced fighters and would be difficult for their Anglo commanders to use effectively, they added 4,000 men to the force of only 1,500 Union soldiers in the territory.4

The most salient reason Latinos joined the New Mexico Volunteers, as the new regiments were called, was fear of Texans. Two decades before the Confederacy came into existence, Texas had invaded New Mexico for the first time. Since then, Texans had often threatened violence against New Mexico’s Latinos to intimidate them, and Texas’s claims to own eastern New Mexico had only been thwarted by the federal government. Nuevomexicanos mothers warned their children that if they did not behave, the Texans would take them. While other Americans know the period from 1861 to 1865 as the Civil War, Nuevomexicanos referred to it as the War With the Texans.5

Some of the Volunteers joined for a reason similar to those of escaped slaves in the East—to free themselves. These were poor men held in debt peonage, a form of indentured servitude. The Union Army forbade the return to peonage of a man who volunteered. When the Union eventually won the war, the 13th Amendment and anti-peonage legislation ended this form of semi-feudal labor. If service in the army freed the peon, the victory he helped win led to peonage being outlawed.6

Other Latinos volunteered because they feared the Texans would introduce chattel slavery to the territory, still others out of allegiance to the United States. And, of course, some enlisted for excitement or for the pay, which was low but still better than what an unskilled laborer earned.7 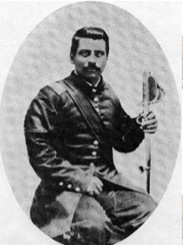 Captain Rafael Chacon commanded Company K of the First Regiment New Mexico Volunteers. Unlike African American soldiers in the Civil War, Latino soldiers were sometimes commanded by Latino Union officers. Capt. Chacon’s immediate superior was Col. Kit Carson, the famous Western scout who advocated for equal treatment for Latino soldiers regardless of race and insisted that his regiment be bilingual.

While the majority of the Nuevomexicanos Volunteers were Mexicans by birth who had become Americans through the annexation of New Mexico, a substantial number of the Latino soldiers had been born in Sonora and Chihuahua in Mexico itself. At the time there was no prohibition on Mexicans crossing the border to settle in the United States, and free travel back and forth was as common after 1848 as it had been before the Mexican War. Many Nuevomexicanos undoubtedly saw their cousins to the south as having as much right to settle along the Rio Grande as the Anglo strangers from the east.8

The Nuevomexicanos rallied to expel the Texan invaders, but their contribution was not always appreciated by their Anglo commanders. The New Mexico Volunteers not only faced the problems inherent in any army organized on short order to meet an emergency, but those problems would be compounded by racism and cultural dissonance.