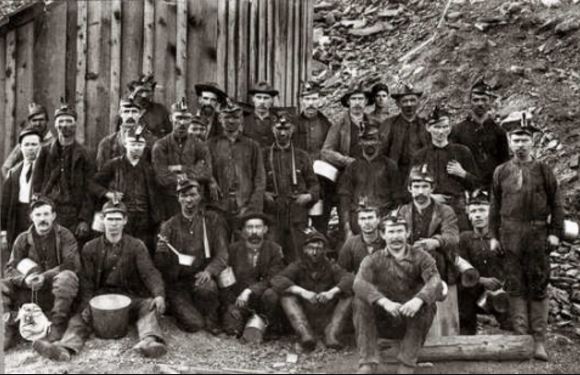 The Gazette newspaper in Iowa recently reprinted an editorial it published in 1895 calling for the exclusion of Italian immigrants from the state. The opinion piece was entitled “ITALIANS NOT WANTED.” 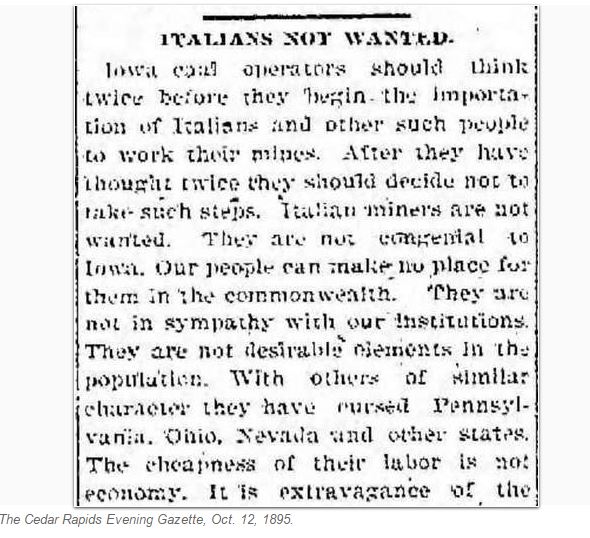 It urged coal mine operators to shun Italian immigrants:

Iowa coal operators should think twice before they begin the importation of Italians and other such people to work in their mines. After they have thought twice they should decide not to take such steps. Italian miners are not wanted…

They are not congenial to Iowa. Our people can make no place for them in the commonwealth. They are not in sympathy with our institutions. They are not desirable elements in the population. With others of similar character they have cursed Pennsylvania, Ohio, Nevada and other states.

They will not educate…They have poor conception of our standard of morality. They are not self-governing. Whenever they are to be found in considerable numbers, that locality bears every evidence of blight.

Life and property is insecure. Local government is unstable. Riots are of frequent occurrence. Murders are matters of every day life. Feuds and conspiracies are born with the babe and grow with the man. The pistol and the stilletto are their arguments.

They have no habits that our people can copy with benefit. Whatever they teach is a detriment to the community. They will not learn, because knowledge would overthrow their characters and cause them to cease to be the menace they have been whenever colonized in America.

If the mines cannot be worked without the aid of such men let them be closed. No business should be operated in Iowa that will not pay wages on which a man can bring up a family of Americans — citizens of whom the best of their countrymen are proud.

But this lost diatribe reflects wrongness on a truly epic scale. Even more than a century later, it’s embarrassing to find out we ever ran something like this. It’s hard to imagine an America without the contributions of Italian immigrants.

Well, try replacing “Italians” with “Mexicans” or maybe “Muslims.” Take out proper punctuation and break complete sentences, scramble the grammar, toss in some insults, mix in a big bucket of braggadocio, scatter a “believe me” here and there and add a promise to build a big, beautiful wall.

You’ve got a…presidential campaign speech. And, apparently, you’ve got the makings of a president, in 2016.

America had a long tradition of bigotry and fear, stretching from the anti-Irish Know Nothings of the 1850s, to those who wanted to keep out the Italians in the 1890s and the anti-Semites who sought to exclude Jews fleeing Hitler in the 1930s.