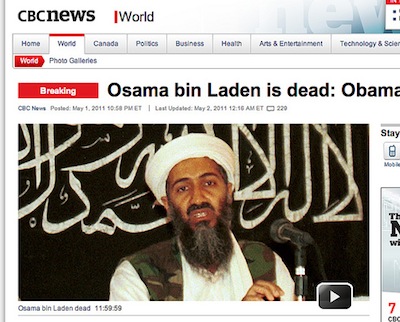 A cross-section of Muslim leaders on Long Island applauded the news of Osama bin Laden’s death, according to an article in Newsday today.

Newsday reporter Víctor Manuel Ramos caught up with a mix of local Muslims, who expressed relief that a man who had stoked so much Islamophobia over the past decade had been brought to justice:

Talat Hamdani of Lake Grove was grateful on two counts when President Barack Obama told the nation Sunday night that the man behind her son’s death had met his end.

She was pleased that Osama bin Laden had at last faced justice, and that the president in his speech made a clear distinction between Islam and terror.

“As a Muslim-American, it was a speech that I am very proud that the president made,” Hamdani said.

The remains of her son, Salman, 23, a police cadet, were found under the rubble of the north tower months after the Sept. 11 attacks. Bin Laden’s death won’t bring her son back, she said, but it helps her and other families—and the country—to move forward.

“I feel grateful that the president . . . called for unity for all Americans, no matter what part of the world we came from,” said Hamdani.

“It took 9 1/2 years to bring him to justice, but there’s a sense that the hunt is over and that his evil didn’t go unpunished,” she said.