This article is part of The Immigrants’ Civil War. Scroll down for a complete index of the series.

The attack on Fort Sumter on April 12, 1861, left Washington, DC, isolated and alone. With Virginia moving towards secession, Abraham Lincoln had only a few hundred soldiers to protect the capital. Even with hastily organized volunteers joining in the defense, there were only 1,500 soldiers, marines, and militia available to stop a sudden Confederate attack.1

On April 15, Lincoln issued a call for 75,000 volunteers. The response across the country was tremendous, as young men volunteered to go and fight.

The problem was, these new volunteers would take weeks to assemble, arm, and send to Washington. In the meantime, rumors spread that a force of 20,000 Confederates were moving up to Virginia from South Carolina. Small groups of Confederates were already seen right across the Potomac River from the White House in Arlington, Virginia. Panic seized many and the city’s civilian population began emptying out fearing that the capital would soon be the scene of street-by-street urban warfare.2

The new Confederate Secretary of War, Leroy Walker, had been bold enough to tell a secessionist crowd that the Confederate flag would fly over the Capitol in Washington “before the first of May.”3

What Lincoln needed were well-trained units that were already armed and officered. A few thousand of such men now would be more valuable than tens of thousands of soldiers a few months later. One of the most valuable units would be the Fighting Irish 69th Regiment of the New York State Militia.

When that famous Irish regiment offered its services to defend the capital, its men knew that the path to Washington would not be an easy one.

The first volunteer regiment to try to go to Lincoln’s rescue was the 1st Pennsylvania Volunteers. They had arrived in Baltimore on April 18. At that time there was only one rail link from Washington to the North. It required that the Pennsylvanians get off the train at President’s Street Station, march through pro-Southern Baltimore, and get on a train at Camden Station, near the site of the present Baltimore Orioles ballpark.

As they marched through Baltimore, a mob of 2,500 men confronted the Pennsylvanians on the streets. The mob particularly focused on a black man in uniform who accompanied them. The crowd began chanting, “Nigger in uniform,” and hurled stones at him. He had to be rescued by an officer.4

The next unit to move through the city got an even worse reception. The 6th Massachusetts, which included many working class textile mill workers, was violently attacked by the Baltimore secessionists the next day. Four soldiers were killed, prompting the Massachusetts men to fire into the crowd. The next unit to go to Washington, New York’s 7th Regiment, avoided Baltimore entirely. Passage though that city had become too dangerous.

With little time to get ready, the Irish 69th opened its ranks to Irish volunteers who wanted to fight to save Washington. Two thousand men volunteered, but the regiment was only allowed by the authorities to take half that number with them.

The 69th and other Irish militia units had been controversial in the years before the war, and some states had disbanded units officered by Irishmen. Colonel Michael Corcoran, commander of the 69th, was himself facing trial by the state for his open expressions of Irish nationalism. But the intense need for troops led New York City’s Republicans, many of whom had been associated with the anti-immigrant Know Nothings, to put bigotry aside.

The Republican newspaper, The New York Times, reported glowingly about the Irish response to the attack on Fort Sumter. For example, on April 21, 1861, it reported on the ceremonial display of Irish and American flags by the 69th:

“When Sergeant-Major Murphy…unfurled the united standards of Old Ireland and Young America, the enthusiasm of the soldiers and surrounding masses was wholly indescribable. All along Broadway, the multitudes shouted their huzzas.”5 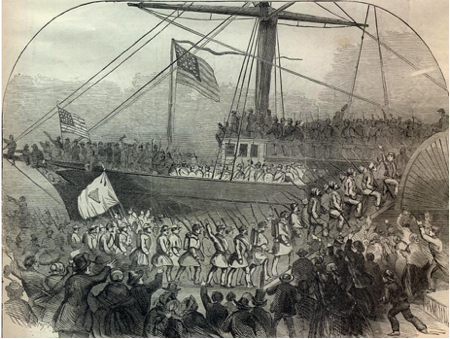 The Irish Fighting 69th Regiment of the New York State Militia heading off to an endangered Washington.

A few years earlier, the Republican elite would have seen the green flag carried by the 69th as an emblem of treason. When the immigrant soldiers marched to their ship to set sail for Maryland on April 23, the wealthy turned out beside their Irish housemaids to cheer the Irish banner.6

The 69th was one of the first New York units to head to Washington. Along the way they secured Annapolis, a key link between Washington and the sea coast. They arrived in the capital on May 4, where they set up camp on the grounds of the nation’s Catholic college, Georgetown. They were soon visited by Abraham Lincoln, who honored them for coming to his government’s rescue just three weeks after the war broke out.7