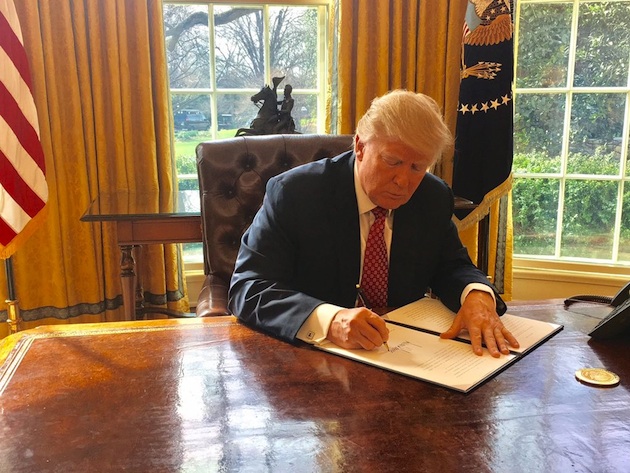 The Muslim Ban was set to go into effect on Thursday, March 16. The judge’s order is national in scope and puts a halt to the imminent implementation of the unprecedented Muslim ban.

Lawyers for Hawaii presented voluminous evidence that President Trump had promised to impose a “Muslim Ban.” Lawyers for the Trump Administration argued that the ban was not religiously-based and was only an exercise of the president’s national security powers. Judge Watson asked incredulously at the hearing; “Are you saying we close our eyes to the sequence of statements before this?”

In his decision, Judge Watson said that a “reasonable-objective observer…would conclude that the Executive Order was issued with a purpose to disfavor a particular religion in spite of its stated, religiously-neutral, purpose.” He said that the plaintiffs were likely to ultimately succeed in their lawsuit.

The judge addressed the contention raised by the Trump Administration that the Executive Order could not be directed at Muslims because the countries targeted contained only 9% of the world Muslim population. In frank language, the judge said that “the illogic of the Government’s contention is palpable. The notion that one can demonstrate animus towards any group of people only by targeting all of them at once is fundamentally flawed.” The judge warned that the consideration of whether the First Amendment’s religious freedom protections applied was not a “purely mathematical exercise.”

Judge Watson also dismissed the Trump Administration’s argument that since the new ban applied to all citizens of the six countries regardless of their religions, it could not be a violation of the First Amendment. The jurist pointed out that the countries ranged from 90.7% to 99.8% Muslim. He said it would not be a “leap” to think that “targeting these countries targets Islam.”

Watson said that the record “contains significant and unrebutted evidence of religious animus driving the promulgation of the Executive Order.” The court cited numerous examples of Donald Trump attacking Islam and promising to ban Muslims from entering the United States.

Trump’s first Muslim Ban, issued in January, caused massive confusion at airports around the country and led to widespread protests nationally. The ban failed to pass legal muster and was blocked in court after court. A panel of judges at the 9th Circuit Court of Appeals sustained a restraining order issued by a Seattle judge, essentially killing the first ban. A month later, a new ban was issued that was dubbed Muslim Ban 2.0. That ban was just as constitutionally suspect as the first one.