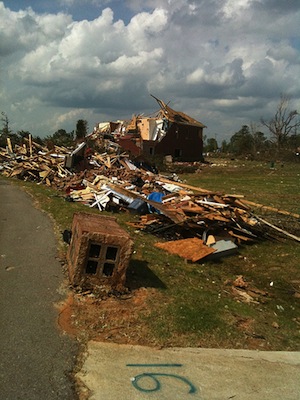 Tornado damage in Alabama, photographed in early May.

Tornados have ravaged whole cities and towns in Alabama this year, and a new anti-immigrant law is slowing the rebuilding.

While ads are running on TV encouraging Tuscaloosans to go into the building trades following the passage of a law modeled on Arizona’s SB 1070, the city,which was the hardest hit in the state, is already reporting labor shortages in the construction industry.

Jimmy Latham, president of the Alabama Association of General Contractors, told the Tuscaloosa News about the problem:

“Statewide, what we think will happen is that the (work) crew sizes will get smaller and prices will go up,” he said.

It will take longer for rebuilding projects to be completed and fewer projects will go on at the same time.

“Through the years, we have relied on immigrant workers to meet our needs,” said Blake Corder, president of the Home Builders Association of Tuscaloosa. He added that immigrants have filled many jobs as laborers and demolition workers, vital for the sort of clean-up needed after a natural disaster.