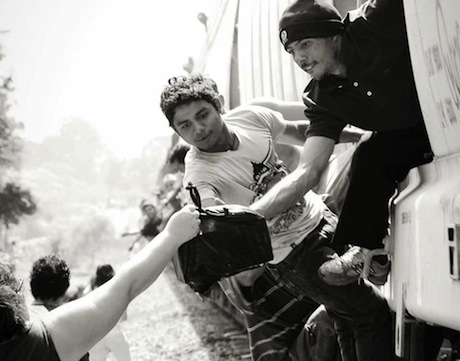 In recent years, net migration from Mexico to the US has slowed to a trickle and may actually be reversing, according to the Pew Hispanic Center. The number of migrants traveling from Central America hasn’t dropped quite as precipitously, however, and those heading north still face a dangerous and solitary road.

Last fall, we featured an interview with Sonia Nazario, whose book Enrique’s Journey follows child migrants as they ride atop “La Bestia,” a freight train that will take them to the Mexico-US border, at the risk of getting robbed, raped, or maimed on the rails. In the book, Nazario writes about women in the Mexican village of La Patrona, who have formed a collective to help ease the burden of the journey, supplying migrants with bundles of food and water as the train passes by.

A recent photo essay in the online magazine In These Times revisits the women of La Patrona, with a story and beautiful photo set by photographer Joseph Sorrentino. Here’s an excerpt from the piece:

At night, trains often slow down to make it easier for the migrants to grab food. One night in February, a train slowed down and then stopped on the crossing. As many as 600 migrants poured off and surrounded the women, quickly exhausting the food and water they had prepared. Toward the back of that train, riding alone between two cars, was José Luís, a scared looking 11-year-old boy from Honduras. He said he was traveling with his brother, but when asked where his brother was, he just waved toward the front of the train. It was a cool night and José Luís was dressed in only a T-shirt, shorts and sandals. Someone gave him a hoodie.

He said that he was on his way to the United States. “There is no work in Honduras,” he said, “and I must help my mother.”

To find out how to aid the volunteers in La Patrona, visit the La Patrona blog or email ayudalapatrona@hotmail.com.