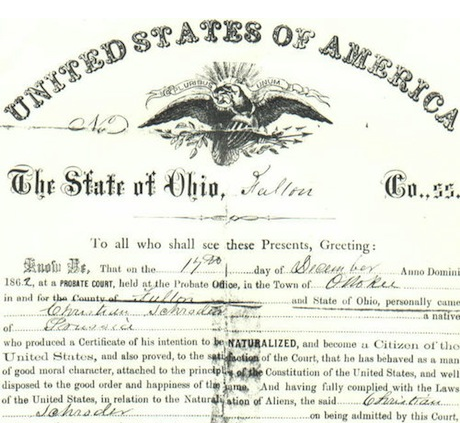 A full list of The Immigrants’ Civil War articles appears at the bottom of this page.

The 1850s had been an era in which the United States seriously considered making citizenship next to impossible for an immigrant to achieve. One proposal would have required immigrants to live in this country for 21 years before they could vote! Many Americans understood that the country needed immigrants to do the work that the native born did not want to do, but they did not want to give the Irish and Germans, who did the dirty work, the right to vote, run for office, or hold government jobs. Some also wanted to bar immigrants from serving in the military, adopting the slogan “Put none but Americans on guard.”1

When the Civil War erupted in April 1861, immigration fell off dramatically. People generally do not immigrate to countries in a state of civil war, and initially the United States was no exception to this rule. Immigration was further retarded by an economic recession that gripped the country in the months after the attack on Fort Sumter. The disruption in textile manufacturing in the North, which was heavily reliant on cotton from the South, meant that new low-skilled immigrants faced uncertain job prospects. Newcomers were discouraged.

The months after the war began also witnessed a tremendous wave of army enlistments by immigrants already living in the United States. Know Nothing theories of immigrant untrustworthiness were shunted aside as immigrants fought and died shoulder to shoulder with the native born. Some immigrants served in famous ethnic units like the Irish Brigade, but four out of five immigrant soldiers enlisted in regiments of mixed ethnicities.2

As the war ground on in 1862, enlistments generally fell off. Congress decided to turn to the foreign-born as a potentially unlimited source of new troops. In July of that year, Congress passed legislation that reversed the Know Nothing trend of the 1850s. Where the anti-immigrant Know Nothings had sought to lengthen the five year waiting period to become a citizen, Congress now shortened that probationary period for immigrants who served in the military.3

The new law provided that any immigrant in the military who had been honorably discharged could apply for naturalization with only one year of residence in the United States. Immigration had once been such a contentious topic that it provoked riots. Now, legislation making citizenship and the vote easier to obtain for immigrant servicemen was passing both houses of Congress without any debate.4

The collapsing distinction between immigrants and the native born was recognized by John Andrew, the governor of Massachusetts, once the state most dominated by the anti-immigrant Know Nothings. A month after the new citizenship amendment was passed by Congress, Andrew assured immigrants that “whether born upon our soil or in other lands and wandering here, you are citizens of a united government, equally sharing in the heritage of freedom. Its opportunities and blessings belong to all of you.” The war would not only end slavery, it would deal Know Nothingisma death blow.5 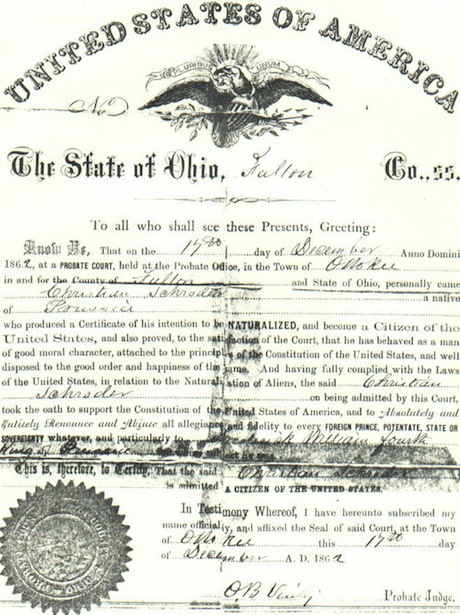 A naturalization certificate from 1862 (Source: The Schroeder Family Tumblr)