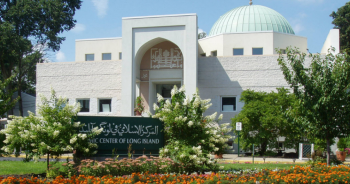 Habeeb Ahmed and Seemi Ahmed of the Islamic Center of Long Island have an interesting op-ed in today’s Newsday on the “Sorrow and Frustration for U.S. Muslims” of the last several weeks. Here are a few excerpts:

Global leaders have gathered for the annual UN General Assembly this week, while the world continues to reel from the recent violence in the Middle East. We are horrified by the response of the Muslim community to the inflammatory movie against Islam and our beloved Prophet Muhammad. Words cannot express the sadness, frustration and helplessness we feel at the loss of so many innocent lives, property and the unnecessary violence.

As it is, the anti-Western feelings in the Muslim world in general and in the Middle East, Indian subcontinent and Africa in particular remain heightened all the time because of the wars in Iraq and Afghanistan, and the drone attacks that kill innocent civilians along with a few extremists. And there is resentment against the United States for its support, over many decades, of despots such as Hosni Mubarak and even Saddam Hussein.

While we unequivocally condemn the unreasonable reactions of Muslims, the question remains: What prompted this extreme reaction from Muslims around the world?

Prophet Muhammad is the ultimate example and reference point for Muslims in every aspect of our lives; as the Quran explains, he is “dearer to them than their own selves.” According to the Quran, all prophets—including Abraham, Isaac, Moses, Jesus and Muhammad—were sent by God almighty as messengers who taught us how to connect with God. Muslims should, therefore, seek to emulate the Prophet in all aspects of their lives, and not only when it suits them.

Muhammad was persecuted, harassed and abused many times during his prophethood. He consistently reacted in the most kind, compassionate, forgiving and merciful manner. That’s why the Quran refers to him as “the mercy to mankind.” He always encouraged dialogue over confrontation and intellect over violence when dealing with provocation and evil mischief. This is the model that Muslims should follow….

Freedom of expression—a constitutional right enjoyed by us Americans—comes with a certain responsibility. We cannot go into a crowded movie theater and yell “Fire!” because the consequences could be devastating. While we do not share the view, expressed by delegations to the UN from major Muslim nations, that international curbs on speech are needed, we do wonder what the purpose was of making a movie that was clearly intended not only to offend 1.6 billion people, but to create conflict and violence. Were the potentially devastating consequences—more than 50 people have died so far—considered? Shouldn’t they have been?