On August 7, 45,000 employees at Verizon Communications, Inc., went on strike after negotiations stalled over a new labor contract for more than a fifth of the company’s work force. The strike is the largest industrial action in the US in four years, and workers at the nation’s biggest wireless carrier—some of whom are immigrants—have put their jobs on the line in the name of fair pay and benefits.

As those workers enter into another week of the strike, solidarity is needed now more than ever. We’ve heard the same story play out across the country: Corporations cite profit losses as justification for destroying middle-class jobs, and cutting pensions and health care benefits; meanwhile, their CEOs are running away with millions. In the case of Verizon, their top executives pulled in a quarter-billion dollars last year. Verizon’s chairman was paid 300 times the earnings of an average worker at the company. 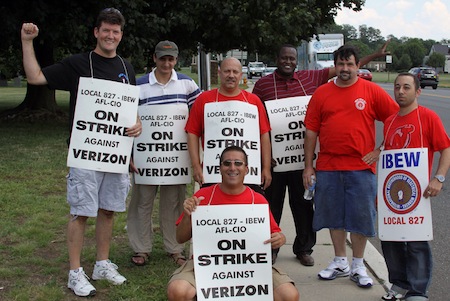 Verizon wants to freeze pensions, cut sick days, and increase employee health insurance contributions. In the face of those stark reductions, employees want to ensure that their hard work and dedication are being fairly compensated.

We’re at a critical time in our nation’s history, and if we don’t stand up against unregulated corporate greed at the expense of the middle class, our economy will suffer the consequences. We need to invest in good jobs here in the US and put money back into working people so that they, in turn, can put money into our economy. And we need to be united in our defense of the professions that stock the middle class, like those in the public and private sectors, teachers and construction workers, students and community members.

In solidarity with the Verizon workers, we’re calling on supporters all over Long Island to come to one of nearly 20 picket lines, to deliver food to strikers, and to offer their moral support. Email charlene.obernauer [at] gmail [dot] com if you want to join us.