This is part of The Immigrants’ Civil War.
The Germans of St. Louis had been the shock troops of emancipation in the Mississippi Valley since April, 1861. When Union General John C. Fremont issued his own proclamation at the end of August emancipating slavesowned by rebels the Germans felt their blood and sacrifice had finally earned its wage. Little did they suspect that their achievement would be undone by a man later called “The Great Emancipator”.

Abraham Lincoln was increasingly worried about the situation in Missouri. What had begun as a campaign by German immigrants to save the state for the Union had now turned into a revolution to overturn the existing property system that defined black men and women as chattel. At the same time Lincoln was assuring the Border states of Kentucky and Maryland that he was not waging a war on slavery, Fremont, the Germans’ champion, had taken a bold step to free tens of thousands of blacks.1

Lincoln wrote to Fremont, warning him that emancipation would “alarm our Southern Union friends , and turn them against us-perhaps ruin our rather fair prospects for Kentucky.” Lincoln “asked” Fremont to modify his proclamation.2  Lincoln viewed keeping Kentucky in the Union as a key to winning the war.

A trusted aide to Lincoln, Montgomery Meigs, visited Fremont in early Sept and wrote in his journal that Fremont’s command was in disorder-“the rebels are killing and ravaging the Unionmen throughout the state…great distress and alarm prevail.”  Questions arose as to whether he was even competent to lead an army, let alone devise a policy on slavery.3

Fremont would suffer another blow to his reputation when his seeming neglect of military matters led “The Irish Brigade of the West” to suffer the same fate as General Lyon’s Germans at Wilson’s Creek.

James Mulligan was a handsome and well-liked Democratic politician in Chicago who commanded the allegiance of that city’s large Irish community. Mulligan organized one of the first Irish regiments of the war, the 23rd Illinois known as The Irish Brigade of the West.

At the same time Fremont’s proclamation was stirring up a national controversy, Colonel Mulligan was ordered to immediately move the Irish Brigade to the isolated Union outpost in Lexington Missouri. On Sept. 1, 1861 the Illinois Irish set out for Lexington with just forty rounds of ammunition and three days worth of food for each man. Mulligan had been told that it was vital that he travel light to reach Lexington before a Confederate force reportedly moving north could get there. He was assured that supplies and reinforcements would soon follow. The 23rd Illinois walked for nine days to reach the small city.4 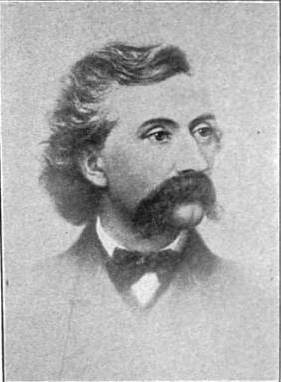 When they arrived, the Irish found a small Union force there with little in the way of supplies. All told, there were fewer than 3,000 Union troops in the town.  Col. Mulligan took command and began fortifying a small college nearby as his base.  On September 11 the Confederates arrived, but Mulligan was able to drive them back. This small victory did not solve the Union supply problem.  By Sunday, September 15, the troops had virtually run out of food. The Irish soldiers, now cut off from help, celebrated Sunday Mass with their chaplain under the eyes of the 10,000 Confederates who now surrounded them.5

That Sunday the soldiers realized that the wells they had used for water had run dry. They became so desperately thirsty that they guzzled the bloody water that the wounded had been bathed in. Mulligan later remembered the men’s “parched lips cracking, their tongues swollen, and the blood running down their chins” as they had to bite into their powder cartridges to fire their guns.6

By Sept. 20, the Confederates had created a sort of movable wall of hemp bales which they hid behind and fired from. They gradually moved closer and closer to the lines of the severely outnumbered Irish Brigade.  A Confederate officer recounted the scene: “Two or three men would get behind a bale, roll it awhile, then stop and shoot…A line would be advanced in this way.”7 Confederate General Sterling Price wrote that Mulligan’s troops “made many daring attempts to drive us back”, but ultimately they were overwhelmed.8 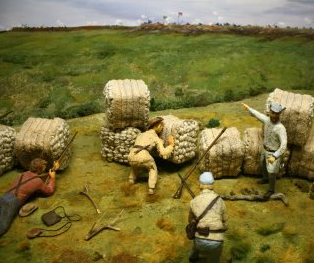 With almost no ammunition left and with many of the men having had neither adequate food nor drink for days, Mulligan was forced to surrender.9

Fremont would later claim that “All possible efforts were made to relieve Colonel Mulligan” but many of his supporters soured on him following what they saw as the abandonment of the Irish Brigade.10

Powerful Missouri politician Frank Blair, who had become Fremont’s bitter enemy, turned his propaganda machine loose on the general. Blair’s newspaper wrote that Mulligan had assumed that “with forty thousand Federal troops within a few days march he would be saved” by Fremont, but that “the heroic officer calculated too largely on the cooperation of” Fremont.  After this editorial was published, the army shut the paper down for a day and arrested its editor.11

Shortly after the capture of Col. Mulligan, an order from Lincoln rescinding Fremont’s emancipation proclamation was published in the national newspapers. The St. Louis German community was outraged by what they saw as a betrayal by Lincoln of the first principal of the Republican Party. When Fremont was removed from command a month later, some of them became so disillusioned that they vowed to try to deny Lincoln reelection.12

In 1861, Missouri’s Germans had organized the only effective resistance to the state’s pro-Confederate governor, they joined General Lyon in his coup deposing the secessionist state government, and they had driven the secessionists out of northern Missouri by July. Unfortunately, by allying with the emancipationist, but militarily incompetent, John C Fremont the Germans alienated many of the state’s native born and Irish Unionists and they became associated with the general’s dictatorial actions. Already at the left end of the state’s political spectrum, they became even more radicalized, and less politically effective, as their defense of Fremont put them at odds with Lincoln.

Source Notes-Generally for the battle of Lexington I used the ORR Series 1 Vol 3 pp. 173-193

Note on troops engaged: Col. Thomas Snead of the Confederate forces estimates 18,000 troops under Sterling Price in First Year of the War in Missouri in Battles and Leaders p. 273. Most other sources place the number of Price’s troops at 10,000 to 13,000. Because Price was receiving irregular volunteers as the siege progressed, it is impossible to ascertain an exact count.