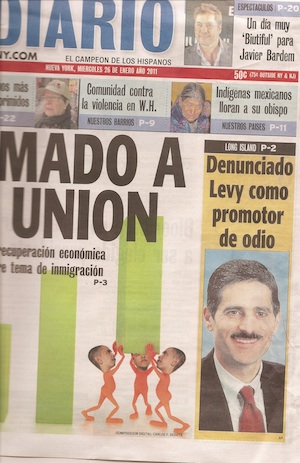 When Suffolk County Executive Steve Levy took office in 2004, he reclassified how hate crimes would be defined, and sanitized media advisories by the Suffolk County Police Department Hate Crimes Unit of terms related to hate crimes, according to the former head of the unit, Det. Sgt. Robert Reecks.

The allegations by Reecks, who was demoted to second in command on the unit a few weeks ago, appeared in a January 23 column by Newsday’s Joye Brown, and riled the county executive enough for his office to release a sprawling 1,400-word press release attempting to rebut some of the claims.

This morning, the story appeared on the front page of the Spanish-language daily El Diario/La Prensa and will likely air today on area radio stations via the Public News Service.

Yet Newsday hasn’t followed up on the allegations. And if history is any indication, you won’t see a follow up any time soon.

Among newspaper readers (yes, some of us still buy those things), it’s no secret that investigative and on-the-ground reporting is becoming increasingly rare, at least in mainstream media.

But Newsday is one of the few print papers that still retains a sizable editorial staff, and that probably won’t change in the immediate future: The newsroom is unionized, and unlike some less fortunate print publications, the paper has a generous parent company in Cablevision.

Then why isn’t Newsday investigating the allegations made against the Levy administration?

Last week, as the Jets dreamed of an improbable, and ultimately unfulfilled, trip the Super Bowl, the paper mobilized general assignment reporters to interview Long Islanders about all things Green.

Reporter Bart Jones—contentiously removed from the immigration beat and now covering religion issues—found himself in someone’s basement talking about the Steel Curtain defense. Over the course of the week, the front page was dominated by Jets paraphernalia, much of it little more than cheerleading.

That’s fine. Only self-delusional journalists believe that editorial decisions aren’t influenced by ideology or market forces. Mark Sanchez sells papers (I would have written about him if I had the time), and best of all, everyone on Long Island, Republican or Democrat, can root for him. Well, except for that guy in the basement.

But two things happened on Sunday. The Jets lost, freeing up a sizable chunk of Newsday’s editorial space, and Joye Brown wrote a dynamite investigative column based on an interview with the former head of the hate crimes unit.

Where will the story go from here? Likely nowhere, unless Brown takes up the investigative torch again.

Newsday is best at converting press releases into news stories, nabbing quotes from public figures and people on the street, sometimes reshaping the story, sometimes not. Can you remember the last time the paper reported an investigative piece related to immigration?

That doesn’t seem to bother members of the newspaper’s editorial board.In a January 19 editorial, the paper called for the Suffolk County Hate Crimes Task Force—a body charged with researching county hate crimes, but riddled with conflicts and missteps—to issue a report on hate crimes that would give Long Islanders perspective on the issue.

It didn’t faze the editorial board that the head of the task force had recently renounced the report as compromised after it was intercepted by Levy’s office. Or that Reecks, the only hate crimes expert on the task force, had just resigned from the body.

Regarding the tampering charges, the newspaper decided to take the word of the Levy administration at face value:

Recently, [Legis. DuWayne Gregory] raised concerns that Levy’s office was tampering with the draft report. But it turned out to be much ado about nothing. The task force had asked the Criminal Justice Coordinating Council, an agency under Levy’s control, to write the draft. The council sent it to Levy’s deputy, but the council says the only change made by Levy’s staff was to request a table of contents for the section on police procedures.

But that was Levy’s side of the story. Gregory contends that the report was improperly routed to Levy, and that the draft had been edited.

That wasn’t the only suggestion of wrongdoing that the editorial board chose to ignore:

On top of that unproductive episode, the latest distraction came this week: Det. Sgt. Robert Reecks, until recently commander of the police department’s hate crimes unit, resigned from the task force – apparently miffed that, in upgrading the unit, the department put a lieutenant in command over him.

Let’s not be distracted by the internal politics of the task force or the police, or by Levy-legislature skirmishes. Let’s focus on shedding light on the hate crimes problem.

Four days later, Brown inked the bombshell interview with Reecks, in which he described a Levy administration intent on whitewashing hate crime reporting in the county.

Thankfully, Brown, a columnist with an eye for investigative scoops, had the drive to look at the story more closely. Otherwise, Newsday readers would have been stuck drawing conclusions from an editorial that portrayed criticism of the county executive as a “distraction.”

As one of my mentors once told me, somewhat embarrassingly, but not without reason: