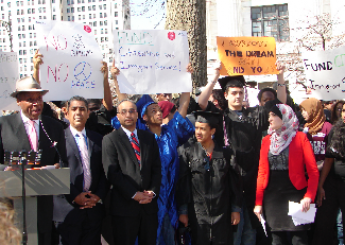 Dreamers are pressing the Obama administration to use executive powers to halt the deportation of potentially DREAM Act-eligible young people. According to The New York Times:

Young illegal immigrants, saying President Obama has done little to diminish the threat of deportations they face despite repeated promises, have started a campaign to press him to use executive powers to allow them to remain legally in the country.

The campaign is led by the United We Dream Network, the largest organization of young immigrants here illegally who would be eligible for legal status under a proposal in Congress known as the Dream Act.

The young people are among the most visible activists in a growing immigrant movement. Their push to focus pressure on the White House reflects deep frustration with Congress for its lack of action on the legislation and with the administration for continuing to deport illegal immigrant students, although Mr. Obama says he supports them.

This week student leaders presented White House officials with a letter signed by more than 90 immigration law professors who argued that the president has “clear executive authority” to halt deportations of illegal immigrants who might benefit from the student legislation. The professors, from universities across the country, pointed to several measures the president could take under existing laws to defer deportations and permit young immigrants to stay temporarily.

On May 17 the students held small-scale actions to publicize their demands in 19 locations around the country, including at the Obama re-election campaign offices in Miami. Gaby Pacheco, a leader of the student network, said Wednesday that they were preparing larger protests for mid-June if the White House did not respond.

“They say all the time that Dreamers shouldn’t be deported,” Ms. Pacheco said, referring to the young immigrants. “We’ve heard a lot of talk, but we have not seen action.”

The students’ escalating actions could be a problem for Mr. Obama, who is counting on strong support from Latino voters to win again in several states that supported him in 2008, particularly Colorado, Florida, Nevada and New Mexico. Polls show very high support among Latinos for some version of the Dream Act,  including 91 percent in the 2011 National Survey of Latinos from the Pew Hispanic Center.

By the way, can the Times please stop calling these students “young illegal immigrants.” Jeepers!