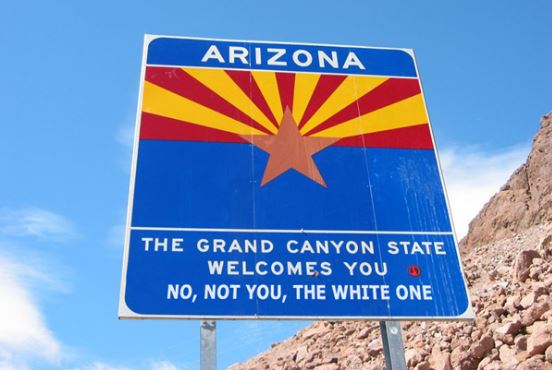 The last surviving section of Arizona’s anti-immigrant “Show Me Your Papers”  law, popularly known as SB-1070, has been defanged. Most of the law had been ruled unconstitutional by the Supreme Court in 2012, but the Court did not overturn one section requiring police to inquire into the legal status of a person they stopped if the police had a “reasonable suspicion” that the person was undocumented. This section of the bill led to racial profiling of Latinos, who seemed to be the only people questioned.

The enforcement of this remaining section of the law was challenged in court by a coalition of immigrant rights groups, led by the National Immigration Law Center. Yesterday, the state settled the lawsuit. Under the settlement, the state must pay 1.4 million dollars in attorney fees to the plaintiffs.

The state’s attorney general was required to issue the following instruction to police:

SB-1070 had been passed in 2010 by a triumvirate of Gov. Jan Brewer, Sheriff Joe Arpaio, and State Senate leader Russell Pierce. Since then, all three have been disgraced. Russell Piece became the first elected lawmaker recalled by voters in Arizona’s history. He later lost a job as a right-wing radio host when he called for the forced sterilization of some black and Latina women. Joe Arpaio has been found in contempt of court for his own extensive use of racial profiling to harass Latinos living or passing through Maricopa County. The judge in his civil contempt case has recommend that possible criminal charges be considered.

The man behind the law, Kris Kobach, is an anti-immigrant activist and politician from Kansas. He has authored a number of bills directed against immigrants, as well as voter ID laws. Whenever these laws have made it to court, they have been overturned.

This final defeat leaves the structure of SB-1070 a burned-out shell.