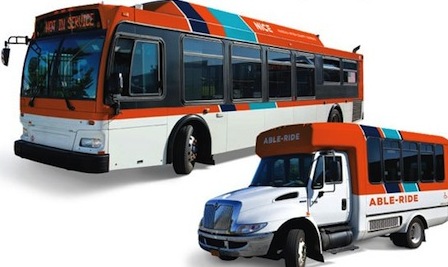 As we predicted, Veolia Transportation released a statement yesterday stating that Not-So-NICE buses will experience service cuts. While we expected the service cuts, we were surprised to learn that the cuts are due to a $7.3 million budget shortfall. When Veolia bid to take over service in Nassau County, they promised to run a system with Nassau’s measly $2.5 million contribution. But now they’re claiming that this just isn’t enough. The story sounds familiar, doesn’t it?

To add insult to injury, next week’s public hearing—where the service cuts will be announced—did not have any notices translated into Spanish. By not providing adequate translation, Veolia is in violation of the Title VI of the Civil Rights Act.

According to Federal Transit Administration guidelines, Veolia should have 1) timetables and route maps in languages other than English, 2) multi-language phone lines, 3) multilingual staff in information booths, 4) pictograms, 5) multi-language announcements at stations and on vehicles, 6) language identification using “I Speak” cards, and 7) advertising in ethnic media.

The Long Island Bus Riders’ Union, a project of Jobs with Justice, is already mobilizing in opposition to Veolia’s service cuts and discriminatory policies. Join us at our upcoming press conference on Tuesday, February 21, at 11am (700 Commercial Drive, Garden City)

Additionally, we are mobilizing for the first public hearing the following day on Wednesday, February 22, at 5pm at the Uniondale Marriot (101 James Doolittle Boulevard). Please join us and be prepared to give testimony as we demand that our voices are heard, and that bus riders don’t get rolled over yet again.