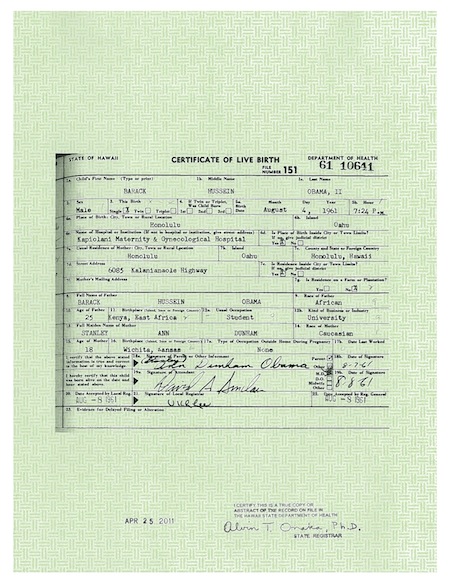 The president’s release of his long-form birth certificate will not cool the most radical of birthers. After all, it carries the title across the top “Certificate of Live Birth.” I’ve had birthers yell at me in discussions of this matter that only a form with the title “Birth Certificate” would satisfy them.

Even if Obama was born here, some birthers, like Orly Taitz, believe that he is not a natural-born citizen because his father was not a citizen.

Taitz claims that the 14th Amendment—which mandates that anyone born in the US is a citizen—does not apply to the citizenship qualification for becoming president. She argues that the 1787 constitutional requirement that a person be a natural-born citizen to hold the office of president was not modified by the post-Civil War amendments, and, using a highly suspect reading of history, she says that in 1787, the child of an alien father was not a natural-born US citizen, even if his mother was American and he was born here.

In other words, the germ of foreignness passed along by Obama’s father infects his very being. Even if he never really knew his father.

A small minority of birthers take Taitz’s argument even further. They argue that in 1787 non-whites could not be natural-born citizens, and that the same rule continues in effect today. While on its face this is the rankest bigotry, in fact, it tracks Taitz’s own claims to their least politically acceptable conclusion.

Apart from the ridiculous factual and legal arguments of the politicians who flogged the birther issue, those elected officials also displayed an amazing bigotry against the foreign born and their children.

The natural-born citizenship requirement in Article II of the Constitution is a relic from a time when the Founders feared the importation of a foreign prince to rule America. People like John Jay weren’t worried that an immigrant boy would grow up to be president, they feared that a weak America might import a member of European royalty as president in a time of crisis. This had happened several times in England and the Americans wanted to avoid it at all costs.

So why did so many conservatives even care if President Obama was a natural-born citizen? Do they really think that a foreign-born United States citizen is less capable or less loyal to the United States?

Democrats like to say that birthers are prejudiced against blacks, but a deeper look reveals a bigotry against the children of immigrants, as well.