Scroll down for list of The Immigrants’ Civil War articles.

In 1841, leading figures in Ireland sent a petition signed by 60,000 Irish to the diaspora in America. At the head of the list of signatures was that of Dan O’Connell, the man known as The Liberator for leading the Irish civil rights movement. Before O’Connell, the British overlords ruling Ireland only recognized the full legal rights of an Irishman if he converted from Catholicism to Protestantism. O’Connell led a broad popular struggle for the equality of all Irish, irrespective of religion. O’Connell was a hero to Irish in America and worldwide.

The 1841 Irish petition was entitled, “An Address From the People of Ireland to Their Countrymen and Countrywomen in America.” It did not deal with oppression in Ireland, but rather with inequality in the United States.

The address to the immigrant Irish declared that slavery in America was a “foul blot upon…the fair name of your adopted country… America is cursed by slavery! We call upon you to unite with the Abolitionists… Irishmen and Irishwomen! Treat the colored people as your equals. As brethren. By your memories of Ireland continue to love liberty-hate slavery…”

Many Irish American leaders rejected the address almost as soon as they read it. 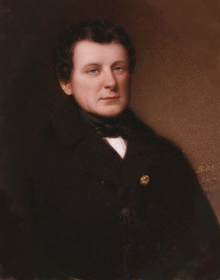 Daniel O’Connell, The Liberator of the Irish. In 2010, President Barack Obama reminded an audience in Dublin of the friendship between Dan O’Connell and Frederick Douglass. The Irish civil rights leader once called the black abolitionist the “black O’Connell of America.” (Source)

Bishop John Hughes, a leader of Irish New York wrote that “it was the duty of every naturalized Irishman to resist and repudiate the Address with indignation.” “I am no friend of slavery,” he wrote, “but I am still less friendly to any attempt of foreign origin to abolish it.”1

One of the country’s leading Irish Catholic newspapers, The Boston Pilot, was even more direct in its opposition. It warned that the Catholic-hating Abolitionists wanted to “bathe the South in blood” and that they did not care if they destroyed the United States in their drive to abolish slavery. The Pilot even concocted a conspiracy theory in which they described the ancient Irish enemy, England, as being behind a plot to encourage the Abolitionists to weaken the United States by sowing discord.2

The address and the reaction of some Irish American leaders to it illustrates two central points in the way many Irish immigrants came to view African Americans. First, Catholic Ireland had no history of supporting slavery. Immigrants did not leave Ireland with preformed views on the American racial hierarchy. Second, something happened when the Irish came to America that reshaped many of their views on race and human servitude.

That “something” was the Democratic Party. The party had served as the political vehicle for Southern slave owners since it was created during Thomas Jefferson’s administration. The slave owners viewed Northern capitalists as their primary rivals for supremacy in the new Republic. They joined with the white working class in the North in an alliance that was based on the principal that “the enemy of my enemy is my friend.” Radical trade unionists found themselves working side by side with Southern patricians against the interests of the moneyed elites in Boston and on Wall Street.

New immigrants, flooding into the cities of the North, often met discrimination and exploitation from a wealthy class of industrialists whom both the slave owners and the immigrants derided as “Puritans.” While immigrants of all nations chaffed at the contempt with which these wealthy industrialists regarded the foreign-born, the Irish were particularly offended.

The real Puritans had tried to exterminate the Irish Catholics when they held sway over Ireland under Cromwell, and, to some, New England’s so-called Puritans seemed no better than their genocidal forebears. Tales of anti-Irish discrimination and violence were rife in Irish wards in Boston, and real acts of mob violence by wealthy industrialist defenders of the old order were exaggerated into threats to the very existence of an Irish immigrant community in the New World.

Slave owners saw the bigoted way that the New England Protestant ascendancy, who formed the backbone of abolitionism, treated immigrants; they also saw an opening to gain political allies.

For several years before the Dan O’Connell’s address, slave owners had been positioning themselves as the staunch defenders of human rights, at least when it came to the human rights of the Irish in Ireland and New England.

The slave owners’ efforts to win over the new immigrants did not go unnoticed by their abolitionist adversaries. William Lloyd Garrison, an abolitionist who believed that discriminating against the Irish would be self-defeating, authored a letter to a friend on the subject. Garrison wrote that there was a “stupendous conspiracy going on in the land. What means this sudden interest of the slave plunderers in the cause of Irish [home rule]? …Again, what means this sudden regard for the sacredness of ‘Southern institutions’ on the part of the leading Irish…? I will tell you. The game is ‘You tickle me and I will tickle you!’ In other words, the bargain obviously is…that the South shall go for [Irish civil rights], and the Irish, as a body, shall go for Southern slavery!”3

During the 1840s, slave owners throughout the South formed clubs to support Irish freedom and donated large amounts of money to the cause. They also made sure that the Democratic Party—which they controlled—opposed the anti-immigrant Know Nothings; that would convince Irish voters to side with a party that defended the enslavement of blacks at the same time as it supported the liberation of the Irish.

When they joined the Democratic Party by the hundreds of thousands, the Irish entered America’s premier school of white supremacy. In the next installment of The Immigrants’ Civil War, we’ll look at what they learned at that academy.

Sources
1. How the Irish Became White by Noel Ignatiev, Routledge (1995) p. 12. Ignatiev’s controversial book contains a challenging discussion of the construction of white identity. It tends to over-generalize about Irish attitudes on race, and its central premise, that the Irish were not white on arrival in the United States is not legally correct. In states that restricted voting to white men, the Irish were allowed to vote. In addition, Ignatiev relies on a very small sample of opinion leaders, ignoring modern opinion research on pre-Civil War America and Irish documentary sources.