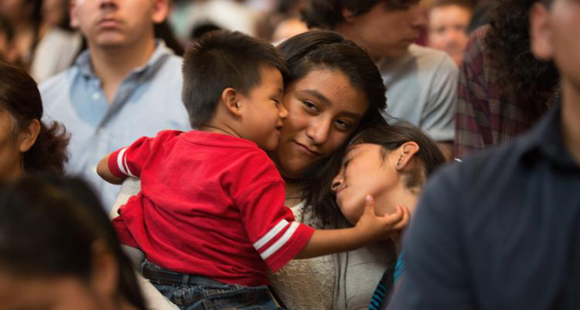 U.S. Senators continue to support and coordinate a regional response to effectively address the humanitarian crisis driving women and children to flee extreme violence from El Salvador, Guatemala and Honduras.

The legislation calls for increased, orderly and humane processing of individuals who reach the U.S.-Mexico border seeking refugee protection. It also cracks down on smugglers, cartels and traffickers exploiting children and families, and calls for government reforms to address violence and instability in the region.

The bill will help families apply for refugee status in the region so they don’t have to make the dangerous journey north, and will ensure that those who have already reached our borders seeking asylum are treated fairly, Senator Reid explained in a statement.

“People in El Salvador, Honduras and Guatemala are imperiled by high murder rates, human trafficking, drug trafficking, sexual assaults, and widespread corruption. We cannot stand idly by as more innocent women and children risk their lives to seek asylum in the United States,” said Senator Reid in a statement. “Instead of responding with deterrence and enforcement we can and should do more to address the violence and instability in the region that is forcing these families to leave their homes.”

The bill includes the following set of actions:

1. Condition assistance to Northern Triangle governments to address the root causes of the violence and instability that are driving migration.The bill would provide conditional assistance to these governments to restore the rule of law; create a more secure environment for children and families; strengthen democratic public institutions and reduce corruption; and promote economic opportunities.

2. Crack down on smugglers, cartels, and traffickers exploiting children and families. It would create new criminal penalties for human smuggling, schemes to defraud immigrants, and bulk cash smuggling.

4. Enhance monitoring of unaccompanied children after they are processed at the border. It would strengthen the Department of Health and Human Services’ability to oversee the safety and well-being of children released to an adult sponsor while they await their court hearing by requiring consent, uniform and timely background checks, post-placement wellness checks and post-release services. The bill also provides resources and guidance to local school districts enrolling unaccompanied children.

5. Ensure fair, orderly and efficient processing of those who do reach our border seeking protection. It would provide a fair, legal process for children andfamilies seeking asylum, improve immigration court efficiency by requiring a significant increase in the number of immigration judges to ensure the prompt resolution of immigration claims, and establish re-integration programs in the region that reduce the likelihood of re-migration for those who do not have legal grounds to stay in the United States.