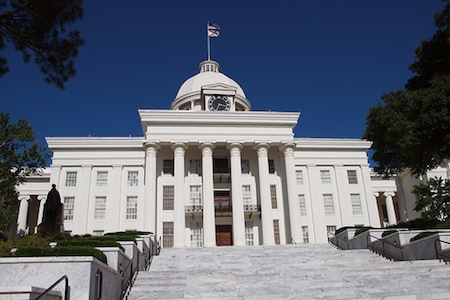 A new anti-immigrant law in Alabama makes that state the worst in the country for Latinos. It adopts Arizona’s SB 1070 and adds bars on the children of the undocumented attending school. It also punishes anyone who knowingly assists an undocumented immigrant. Many Alabamans say that the new law is right in line with the state’s notorious racist history.

Josh Moon of the Montgomery Advertiser says that the law harks back to the state’s record at the beginning of the civil rights revolution:

On a June day in 1963, then-Alabama Gov. George Wallace, fighting desegregation, stood in the doorway of an auditorium at the University of Alabama and created one of the lasting images of the civil rights move¬ment as he attempted to deny black students access.

It was an embarrassing portrait of the state—one that painted Alabamians as intolerant racists.
And we just keep living up to the label.

A little more than a week ago—two days shy of the 48th anniversary of Wallace’s stand—our current legislators took an almost equally embarrassing and certainly equally racist stand of their own, passing an immigration bill that would make Bull Connor proud.

Undoubtedly written by a group of politicians who have never heard of the U.S. Constitution, the new immigration law allows police to arrest and hold any person unable to pro¬duce proof of citizenship, makes it illegal for anyone to provide transportation to an il¬legal immigrant no matter the circumstances, forces schools to gather citizenship information and bars illegal immi¬grants from attending colleges.

It’s quite possibly the most bigoted and hateful bill passed since the days of Jim Crow. (In fairness, Arizona’s been beating us silly lately in the Most Racist State contest, so we needed a big score.)

Lekan Oguntoyinbo went even further, comparing the new law to the Fugitive Slave Act in the Birmingham News:

I once lived as an illegal immigrant for a year in Alabama. Thank God, it was back in the 1980s. For under the radical anti-illegal immigration law recently passed by the Alabama Legislature, it would be a crime for my friends to extend to me much of the same big-heartedness I enjoyed during that trying period.

In August 1985, I was a freshly minted 20-year-old graduate of a midsized university in Missouri. I had about $5 to my name. My parents, who put me through college, had lost everything when Nigeria’s economy tanked.

Under immigration law, I was not allowed to work. So, I borrowed money for bus fare to travel to Dothan, so I could move in with my brother and his family while trying to finagle my way into graduate school at the University of Alabama.

I got accepted, but without the graduate assistantship I needed to pay my way through school. I had to defer admission until summer 1986.

I was determined to find the money. So I moved to Tuscaloosa and stayed with two students I’d met in Dothan. The two friends—Darrin Chatham and Alan Lopez, both members of the University of Alabama football team—put me up at no cost. For months, they fed me, loaned me money, drove me places and introduced me to scores of new friends who were equally kind to me.

I clearly couldn’t have succeeded without the help of my friends, but my success wouldn’t be possible today.

The new Alabama law makes it a crime to give an illegal immigrant a ride or house one. It permits local law-enforcement officials to arrest anyone “suspected of being an illegal immigrant.” It requires public schools to verify the immigration status of students, and denies college enrollment to the undocumented.

So, under this law, Chatham and Lopez would have been breaking the law for giving me shelter. Bob Keith, a pillar of the Tuscaloosa community and an elder at the University Church of Christ, would have been prosecuted for driving me to his home to have lunch with him and his wife. And I could have been arrested and deported when one of my friends was pulled over.

“This law reminds me of the Fugitive Slave Act,” my friend Afi Odelia-Scruggs, a writer, said to me the other day. The Fugitive Slave Act, she pointed out, punished people for extending a helping hand to vulnerable human beings. It doesn’t stretch credulity to argue this new law does the same thing.