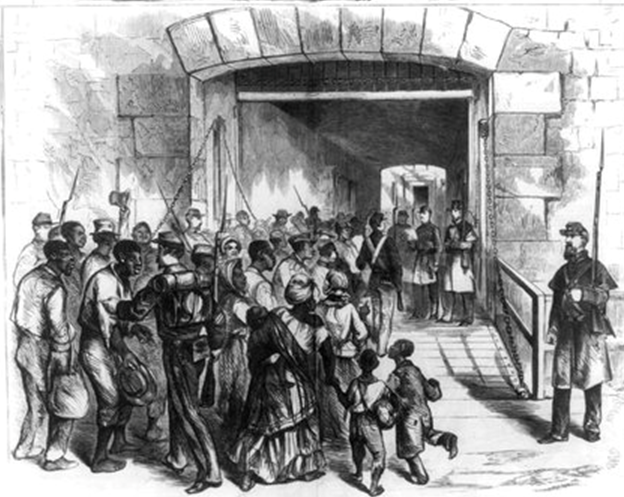 The United States government, because of bad economic times, has done little to mark the 150th Anniversary of the Civil War. This is unfortunate because one of the war’s legal outcomes, the 14th Amendment, created a new definition of citizenship that encompassed both African Americans and naturalized citizens. It also made all of the children of immigrants born here United States citizens. More than 100 million of us would not be citizens if it was not for the 14th Amendment.

Last month, President Obama designated one of the most important sites on the path to the 14th Amendment as a National Monument.

Fortress Monroe is less than an hour east of Colonial Williamsburg. At the very point of a peninsula, it was a tiny, but impervious, piece of United States territory in the heart of Confederate Virginia. 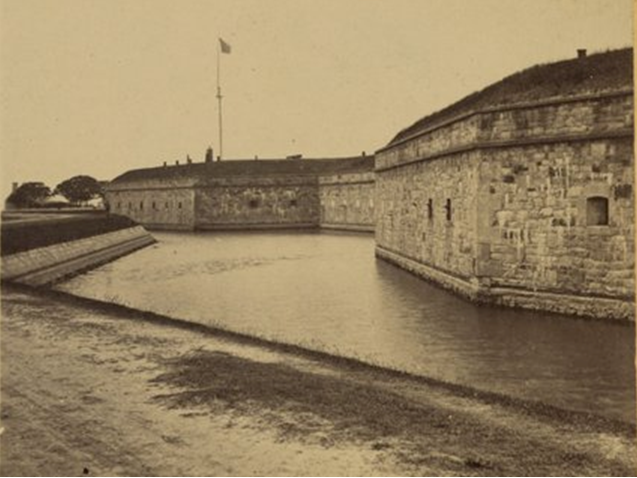 Fortress Monroe during the Civil War

In 1861, three enslaved black men, risking torture or execution if captured by the Confederates, escaped to the fortress. Under the Dred Scottdecision, these three slaves were not United States citizens and under United States law the army commander was obliged to return them to the white man who claimed to own them.
Union General Ben Butler had to decide what to do with Frank Baker, Shepard Mallory and James Townsend. He decided not to return them. With that decision, hundreds of black men and women began walking off plantations in coastal Virginia heading towards Fortress Monroe. Thus began the self-emancipation of tens of thousands of blacks which would speed the issuance of Lincoln’s Emancipation Proclamation, the destruction of slavery with the 13th Amendment, and the blanket recognition of the American citizenship of non-whites in the 14th Amendment.

Fortress Monroe is not only an important site in the history of citizenship, it is also ground zero in the forced migration of blacks to America. In 1619 a ship unloaded the first black slaves in the thirteen original colonies on the spot where the fortress would later be built. Visiting Fortress Monroe will remind us both of the destructive kidnapping and enslavement of people of color, and of the beginning of their march towards citizenship.

Refugees from slavery arrive at Fortress Monroe during the Civil War