Scroll to the bottom for all The Immigrants’ Civil War titles.
Irish Green and Union Blue: The Civil War Letters of Peter Welsh edited by Lawrence Kohl, Fordham University Press (1986) 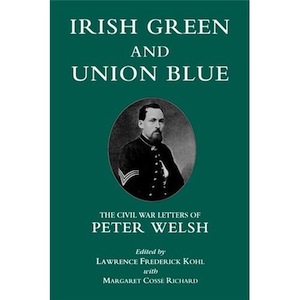 When Peter Welsh joined the Irish Brigade in 1862, he forgot to tell his wife.

Poor Peter had wanted to join up, but family obligations kept him out. In the second year of the war, the handy carpenter was called to Boston to try to settle a longstanding feud within his family there. Caught in the middle, he became the object of both sides’ ire. Peter retreated to a tavern and didn’t emerge until he was broke. Ashamed, he acted on his Unionist impulses and joined the army.

Peter made the decision to enlist shortly before the fifth anniversary of his marriage to Margaret Prendergast, and he spent the rest of his life, which only lasted two more years, trying to reconcile her to his choice.

We don’t have her letters, but it is clear from his letters, chronicled in Irish Green and Union Blue, that Margaret was pissed. Peter spends part of many letters begging her to stop worrying about him, explaining why he joined the army, and promising to be a better husband after his enlistment ended. We can see him arguing with her in many of the letters.

Margaret was especially critical of his decision, as an immigrant, to involve himself in a fight between two fanatical groups of natives—the abolitionists and the Southern fire eaters—intent on slaughtering one another. Her objections to Peter’s service led him to this memorable articulation in an 1863 letter on why an immigrant should feel impelled to safeguard America:

This is my country as much as the man that was born on the soil and so it is to every man who comes to this country and becomes a citizen…I have as much interest in the maintenance of the government and laws and integrity of the nation as any other man… This war, with all its evils, with all its errors and mismanagement is a war in which the people of all nations have a vital interest. This is the first test of a modern free government in the act of sustaining itself against internal enemies and matured rebellion. All men who love free government and equal laws are watching the crisis to see if a republic can sustain itself in such a case. If it fail then the hope of millions fail and the designs and wishes of all tyrants will succeed…There is yet something in this land worth fighting for.

Even this beautiful letter did not settle things for Margaret and she demanded that Peter write to her father in Ireland and explain himself to her pater familias. Peter’s discomfort is evident in the opening line, in which he admits to his father-in-law that “it is under very peculiar circumstances that I now address you.” He acknowledges that his “present position” as a Union soldier “no doubt seems so unaccountable to you” because it must seem “very, very strange that I should voluntarily join in the bloody strife.”

Peter writes that he understands that both his father- and mother-in-law find Margaret’s situation “most anxious and painful,” seeing their young daughter left alone in a country where they could not help her. He explains why he is fighting in the awkward letter. Peter musters all possible legal and philosophical arguments he can come up with for taking up arms, then ends by claiming that he was as safe in the army as if he had been locked in the safest of towers.

A few weeks after he wrote the letter he would be fighting at Gettysburg.

When Peter Welsh was shot a year later in Virginia, his wife, whose critical letters always seemed to vex him, took what little money she had to go to nurse him back to health. Her ministrations were of no avail, and Peter died on May 28, 1864. Margaret brought his body to Woodside in Queens where he was buried in Calvary Cemetery. Margaret would use her small savings to erect a large monument on Peter’s grave that noted that he was once a color sergeant bearing a flag of the Irish Brigade. 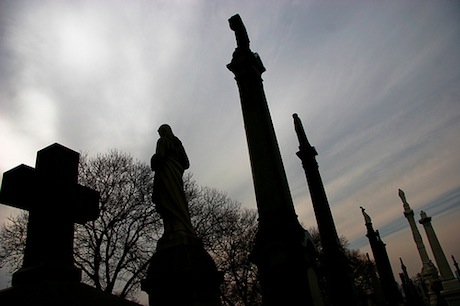 Calvary Cemetery in Woodside, Queens (Credit: A. Strakey via Flickr)

Margaret had always worried that Peter’s enlistment would deprive them of the normal comforts of married life. She survived him by 28 years, but she never remarried. She died childless.

Margaret, whose ornery letters brought out the deep thinker that carpenter Peter Welsh was, rests beside him in the consecrated ground in Queens. We have Peter’s letters because she saved virtually every one.

This volume gives us a window into the thinking of an immigrant working man and his wife, and their sometimes discordant American dreams.