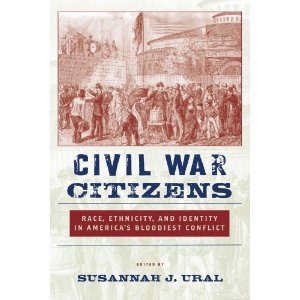 The seven essays in Civil War Citizens: Race, Ethnicity, and Identity in America’s Bloodiest Conflict look at the way in which the conflict determined the citizenship of German, Irish, and Jewish immigrants, marginalized Native Americans as citizens, and incompletely “naturalized” freed slaves.

Germans made the largest contribution by an ethnic minority to winning the war for the Union. The 200,000 German-born troops outnumbered soldiers all of the other groups.

There were as many as 145 units in the Union Army composed entirely of German immigrants, units in which orders and reports were issued in German. The concept of America as a monolingual “English-only” country was foreign to Lincoln’s generation. Military and political leaders understood that loyal, brave, patriotic soldiers came from all backgrounds and spoke many languages.

New York State contributed the most German units to the war effort with 24, but Missouri’s 18 German units played a major role in keeping that slave state in the Union. German immigrants in Missouri fought from the outbreak of the war to keep the native-born Southern aristocracy of the state from controlling its allegiance.

The essays in Civil War Citizens are a bit uneven and incomplete, but the book makes a valuable contribution to the study of those on the margins of Anglo-Saxon society in 1860s America. What comes through in all of the articles is the refutation of the notion that 19th-century America was a place of atomized individualism. All of these ethnic minorities dealt with the federal and Confederate governments as communities, expecting recognition and favor in exchange for supporting the war effort. The successes and failures of these groups on the military and political battlefield helped set the stage for their socio-economic positions after the war.