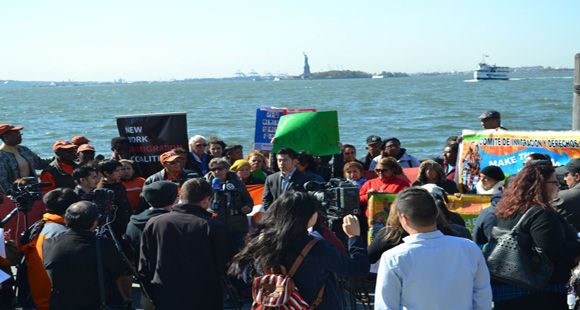 In front of the Statue of Liberty, a major symbol of liberty and justice in the United States, the immigrant community of New York joined together in a protest Tuesday morning in Battery Park, Manhattan, to ask for the immediate implementation of DACA & DAPA. These programs will benefit approximately five million undocumented immigrants across the nation, including about 33,000 immigrants on Long Island.

The protest was part of a National Day of Action in which immigrant families and advocates held rallies across the country to express in one voice, “We can’t wait anymore.”

“It’s enough! We have given many years of our lungs, and I think that we do deserve something,” said Elva Meneses, 47, a Mexican-born woman who has lived in Brooklyn for about 20 years. “Just imagine not seeing your family for twenty years, it’s to much, I think I deserve better, everyone does . . . this would help a lot of people because we have seen families being separated, parents from their children and children from their parents . . .”

But the real purpose of this National Day of Action was to call the Fifth Circuit Federal Court of Appeals in New Orleans to make a decision regarding DAPA and the extension of DACA. The implementation of these programs is being delayed as a result of a lawsuit introduced this year by 26 States.

Immigration advocates say the Court must make a final ruling by the end of October.

“We joined the community to ask the Court to tell us what their decision is going to be on this case. If they don’t say anything before the end of October, then we are not going to have time to take this case to the Supreme Court,” said Charlotte Gossett, organizer from the New York Immigration Coalition. “It does not matter if they say yes or not, of course we want the Court to say yes, but more importantly is that they tell us their decision, so we can go to the Supreme Court and win this case there.”

DACA and DAPA are part of the executive orders announced by president Barack Obama in 2014. It is estimated that the programs will benefit about 5 million undocumented people in the nation, with temporary work permits, renewable every three years, to work legally and obtain driver’s licenses.

The extension of DACA will help the undocumented youth who came to the U.S before the age of 16 and are currently in school. DAPA is the new deferred action program that will benefit parents of legal permanent residents or U.S. citizens.

The two programs were scheduled for implementation this year but a Federal Court in Texas ruled against the programs and prevented them from starting. Those States against the measures say the deferred action programs are unconstitutional and could make their cities less safe.

Meanwhile, immigration advocates say they will continue to ask the Court to make a decision and push for comprehensive immigration reform.

“If we get to November we know that the chance for the Supreme Court to listen to us is vey small, and we are going to have to wait and we are going to have to look at the coming elections and the candidates and see what they can offer to help undocumented immigrants . . . and see if they are thinking about the 11 millions undocumented people living here,” Gossett said.