Yesterday’s argument in the Supreme Court over Arizona’s SB 1070 should remind us of just how bad things might get if the court upholds the law.

I am not a big fan of analysis that tries to predict the outcome of cases by the questions judges ask. News reports after the lower court hearing on SB 1070 indicated that the judge was likely to uphold the law, but she issued an injunction against it instead. Just because Justice Sotomayor asked the Solicitor General a tough question does not mean that she is going to find SB 1070 constitutional.

Having said that, though, no one should believe that overturning SB 1070 is a sure thing. In June, we may well get a ruling that allows all or part of the law to go into effect. If we do, we may see enforcement begin in Alabama, Arizona, Georgia, and South Carolina almost immediately.

That would be very worrisome. When the Alabama law was enforced for just a matter of weeks, immigrants reported widespread abuses, such as children being denied access to education. Some immigrants simply fled the state. If SB 1070 is found constitutional, we will see the same thing happen in all four of these states. 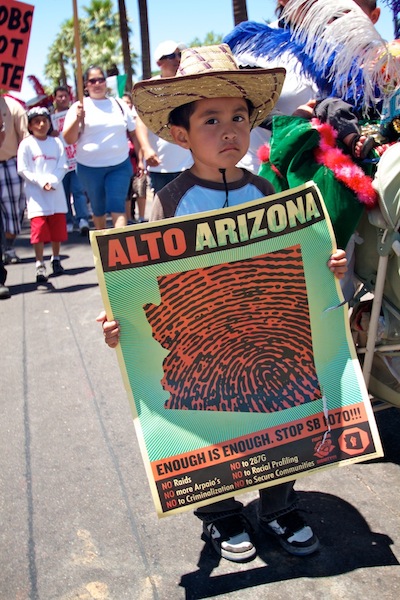 We will also see a renewed push for laws targeting immigrants. When federal courts blocked the implementation of anti-immigrant laws in Arizona and Alabama, those campaigns died down for a while. But immigration will be on the front burner again. Over the next year, at least 20 states will likely see new legislation aimed at immigrants if SB 1070 is found to be constitutional.

If the Supreme Court ignores established precedent and rules for Jan Brewer and company, we need to go back to a strategy of resistance. We’ll need to apply economic pressure and public outrage to states and politicians that choose to target Latino immigrants and inflame racial divisions.