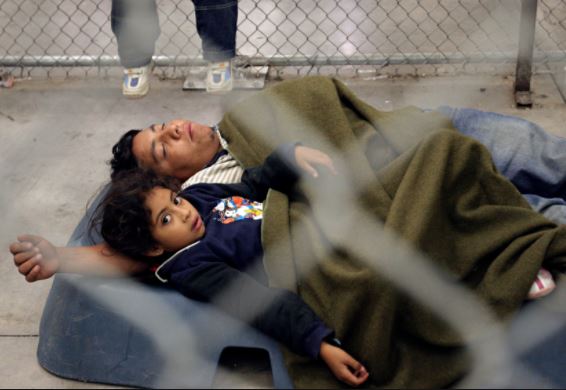 Jonathan Blitzer covers immigration for The New Yorker. Since Donald Trump became president, Blitzer has been speaking to a veteran ICE agent to gauge the mood inside the immigration enforcement wing of the Department of Homeland Security. You can read the whole story here.

While the ICE agent is troubled by changes at ICE over the last six months, the agent told Blitzer that others in ICE think that they have been given carte blanche to ride roughshod over the rights of immigrants.

In April, the agent texted me a screen shot of a page from the minutes of a recent meeting, during which a superior had said that it was “the most exciting time to be part of ice” in the agency’s history. The photo was sent without commentary—the agent just wanted someone on the outside to see it…The agent, who has worked in federal immigration enforcement since the Clinton Administration, has been unsettled by the new order at ice. During the campaign, many rank-and-file agents publicly cheered Trump’s pledge to deport more immigrants, and, since Inauguration Day, the Administration has explicitly encouraged them to pursue the undocumented as aggressively as possible. “We’re going to get sued,” the agent told me at one point. “You have guys who are doing whatever they want in the field, going after whoever they want.”

The agent sees a change in the worldview of ICE. He told Blitzer; “We used to look at things through the totality of the circumstances when it came to a removal order—that’s out the window,” the agent told me the other day. “I don’t know that there’s that appreciation of the entire realm of what we’re doing. It’s not just the person we’re removing. It’s their entire family.”

the agent sees long-standing standards being discarded and basic protocols questioned. “I have officers who are more likely now to push back,” the agent said. “I’d never have someone say, ‘Why do I have to call an interpreter? Why don’t they speak English?’ Now I get it frequently. I get this from people who are younger. That’s one group. And I also get it from people who are ethnocentric: ‘Our way is the right way—I shouldn’t have to speak in your language. This is America.’ ” It all adds up, the agent said, “to contempt that I’ve never seen so rampant towards the aliens.”

The agent is particularly concerned by the new initiative by ICE to rearrest unaccompanied children who fled Central America. According to Blitzer:

“I don’t see the point in it,” the agent said. “The plan is to take them back into custody, and then figure it out. I don’t understand it. We’re doing it because we can, and it bothers the hell out of me.”

The agent went on, “The whole idea is targeting kids. I know that technically they meet the legal definition of being adults. Fine. But if they were my kids travelling in a foreign country, I wouldn’t be O.K. with this. We’re not doing what we tell people we do. If you look next month, or at the end of this month, at the people in custody, it’s people who’ve been here for years. They’re supposed to be in high school.”

Another new initiative, arresting the parents of child refugees, is leading to misery. Blitzer writes:

“We seem to be targeting the most vulnerable people, not the worst.” The agent also believes that the policy will make it harder for the government to handle unaccompanied children who show up at the border. “You’re going to have kids stuck in detention because parents are too scared of being prosecuted to want to pick them up!” the agent said.