Deferred Action for Childhood Arrivals (DACA) has been in the news a lot lately. One reason is the result of Republicans wrongly claiming DACA is behind the increase in Central American kids arriving at the border. Another reason is that DACA renewals are just getting underway. Now President Barack Obama is reportedly contemplating expanding the DACA program in September to include hundreds of thousands, if not millions, of additional beneficiaries. It is worth taking a look at the impact that DACA has had on the lives of those who have already received it.

New research shows a significant improvement in the lives of those granted DACA. Young people granted DACA receive two years’ permission to remain in the United States and a work authorization. This may not sound like much, but the work authorization allows them to also obtain a Social Security card and in turn to more fully participate in America’s civic life. 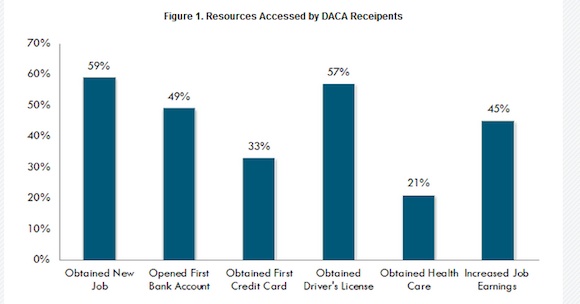 The chart above shows the major benefits reported by those who have received DACA. At the time of the survey, most had been DACA-authorized for about a year. Still, 59 percent had been able to use their work authorization to find a new job. At CARECEN, we usually find that our clients move out of the shadow economy and find work with better pay and labor conditions when they get their work permits.

The second most common benefit was getting a driver’s license. All but two states allow DACA recipients to apply for driver’s licenses. These new drivers have a wider access to job opportunities.

Having a Social Security card under DACA also makes it easier for immigrants to open a bank account. This means they no longer have to carry their life savings around in their pockets. This improves their safety.

Research also tells us when those who received DACA will be renewing their work permits. We will soon be in the peak renewal period, as this chart shows: 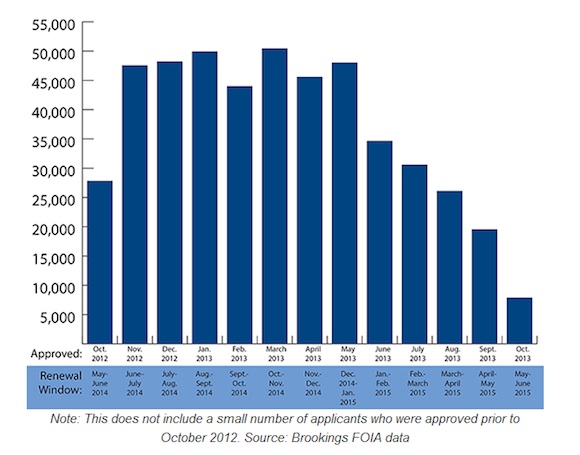 Those who already have DACA should renew 120 to 150 days before their work permits expire.