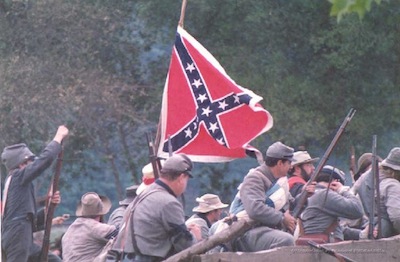 The Public Radio International (PRI) program The World reported last week on the popularity of Civil War reenacting in Germany.

On a warm spring morning about 50 miles north of Berlin, Union troops and their Confederate rivals prepare for battle. They are camped out for the weekend at a Wild West theme park in Templin.

About 60 people are dressed head to toe in 1860s-period clothing. Women wear hoop skirts. The men are in handmade uniforms with lots of colorful piping and brass buttons. A few young soldiers swing their bayonets. “I’m a simple soldier, a private,” said Tobias Melchurs.

“There were about 200,000 who had German roots that fought in the Civil War,” Melchurs said. “I think it is important for our history.”

But a lot of the bloodier and more tragic parts of the war seem glossed over – like the punishing number of deaths and the issue of slavery. Ute Frevert, a historian, and head of the Max Planck Institute for Human Development, said this sometimes happens when people try to re-live history.

And Frevert pointed out that the fantasy of war is not often indulged in Germany. After World War II, any talk of military glory became socially taboo here.

“As a German I have to be hesitant in the post-1945 culture, because wars are not something that Germans are used to finding fascinating and kind of exciting and appealing,” she said.

So for those at the reenactment, it is appealing that the U.S. Civil War took place in another country, in another time. It is safer, even romantic. A lot of fantasies have built up around the Confederacy, thanks to the movie, “Gone with the Wind;” it is a staple of German popular culture.

Historian Yoni Appelbaum writes in The Atlantic that the preference for the Confederacy among modern German re-enactors betrays the real German immigrants who fought in the war.

“Take the [Germans] out of the Union Army and we could whip the Yankees easily,” Robert E. Lee allegedly remarked. The quote, likely apocryphal, captures an important fact. Immigrants born in Germanic lands were enormously overrepresented in the Union Army. By one estimate, 176,817 donned the army blue, half again as many as their share of the overall population would have predicted.
Other estimates place the number of Germans in the Union forces at more than 200,000.

If the German re-enactors actually “model their characters in the reenactments after…German immigrant soldiers,” as they explained to the reporter that they do, then those who wear gray have their work cut out for them. Less than 10 percent of the Germans immigrants in the United States, scarcely 70,000, dwelt in the entire territory controlled by the Confederacy at the outbreak of the war

So why are Germans dressing in Confederate Gray?

The PRI story explains that “A lot of fantasies have built up around the Confederacy; thanks to the movie Gone with the Wind, it is a staple of German popular culture.” Margaret Mitchell’s novel was published in Germany in 1937; over the next four years it sold 276,900 copies there, becoming the most popular American product of the era. Reviewers hoped it would salvage the reputation of the institution of slavery, redeeming it from the calumnies of Uncle Tom’s Cabin, and praised its portrayal of a “wonderful, strictly regulated life,” with “patriarchal, well-defined relations between black and white.”

The film reached Nazi Germany in 1940. “A great American achievement,” Goebbels raved, “One must see it more than once.” It was reportedly one of Hitler’s two favorite films. A home video shows him teasing a supporter, “I know you would rather be watching Gone with the Wind.”

[T]he glamor extended beyond the magnolias and the melodrama. Hermann Rauschnning, in his memoir, alleged that Hitler regretted the outcome of the Civil War. A literal master-race, holding those it deemed inferior in hereditary bondage: this was the Confederate vision as the Nazis approvingly understood it. It was what they saw when they watched Gone with the Wind.

Back in the 1969, The Band, which first won an audience backing Bob Dylan, released “The Night They Drove Old Dixie Down.”

The song looked at the Civil War through the tragic lens of a poor Confederate whose brother died in service of a lost cause. The song became a top ten hit when civil rights singer Joan Baez covered it. Young people who bought the singles and identified with its protagonist Virgil Cain were the same sort who marched against the Vietnam War and segregation. I’m not sure that modern German re-enactors don’t have the same complex motivation.

While Appelbaum admits that the German Confederates may be doing nothing more than embracing the underdog, he offers a disturbing alternative interpretation:

Wolfgang Hochbruck, a Professor of American Studies at the University of Freiburg and a Union reenactor, is less charitable.

“I think some of the Confederate re-enactors in Germany are acting out Nazi fantasies of racial superiority,” he told author Tony Horwitz. “They are obsessed with your war because they cannot celebrate their own vanquished racists.”

Here is a clip of The Band performing “The Night They Drove Old Dixie Down:”