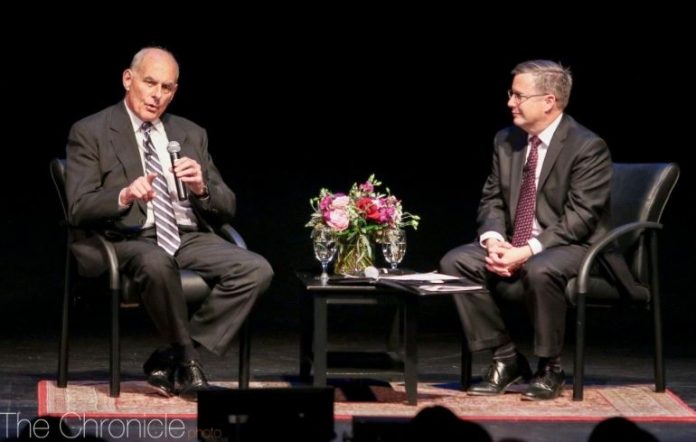 John Kelly, who was both White House Chief of Staff and Homeland Security Secretary under Trump, contradicted both Donald Trump and Kirstjen Michele Nielsen, his successor at Homeland Security, during an appearance last night at Duke University.

Kelly admitted that the Department of Homeland Security was unprepared to care for the children it tore from their parents. Kelly told the overflow audience that “It kind of surprised us. It certainly caught DHS flat-footed and HHS, Health and Human Services, flat-footed.” While the family separation policy itself was itself widely condemned, its ad hoc implementation in 2018 was so chaotic that the whereabouts of parents and their children were often unknown for months.

Kelly also contradicted his old boss, Donald Trump. He told the students and faculty at Duke that the immigrants coming to the Southern border are “overwhelmingly not criminals.” He told the audience that “They’re people coming up here for economic purposes.” He acknowledged that there was widespread violence in the northern Central American countries that “is almost entirely based on our drug consumption,” in his words. This violence, most research shows, is primarily responsible for the flow of people from the region.