Within the Latino community, especially back in our countries of descent, homosexuality can be handled as taboo—you know it exists, but you do not talk about it. In most Latin American countries, religion is quite important and shapes the values of many families, creating a sense of animosity towards the LGBT communities.

My parents are from Ecuador, and during a trip there nine years ago, I met individuals who kept their orientation a secret but would ask me how their lifestyle would be perceived in the US. Based on what I told them, they expressed their utmost desire to one day live in New York. This was their American Dream.

In a few weeks, LGBT couples in New York will be able to walk into City Hall and say, “I do,” thanks to the Marriage Equality Act, a law that was recently passed with the support of Governor Cuomo and a majority of New York State’s elected officials.

The mere thought fills me with excitement, even anxiety, at what awaits—New York State, a symbol of equality. It makes me feel good just to write that.

Unfortunately, this historic victory won’t change the way federal law regards LGBT couples, in New York or any other state, and it won’t help such couples enjoy the same rights afforded to their heterosexual counterparts.

Soon after marriage equality passed in New York, I started hearing about another piece of legislation: The Defense of Marriage Act (DOMA).

Signed in 1996 by President Bill Clinton, the act recognizes the institution of marriage as a union between a man and a woman, denying LGBT couples the federal status given to heterosexual spouses.

Not only does the Defense of Marriage Act block marriage equality legislation on a federal level, it grants states the right to not recognize same-sex marriages conducted by other states.

But that’s not all. The law also keeps LGBT spouses from applying for citizenship in the way that a heterosexual spouse could. 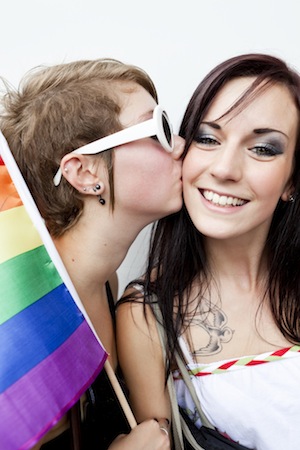 The Immigration Act of 1917 placed openly homosexual immigrants under the classification of “mentally defective,” and the amended Immigration and Nationality Act of 1965 linked homosexuality to “sexual deviation,” enacting a closed door policy to any openly gay immigrant.

The Immigration Act of 1990 eventually made legal immigration possible for openly homosexual immigrants, but that still doesn’t account for same-sex couples who want their spouses to join them in the US.

Since the Defense of Marriage Act does not recognize same-sex marriages, one same-sex spouse cannot file for permanent residency for his or her partner, perpetually ostracizing those couples based on their sexual orientation.

Anyone who studies social issues knows that policies and problems tend to be linked to one another. Immigration and LGBT rights are a perfect example.

Immigrants today, regardless of their sexual orientation, share the aspirations that newcomers throughout history have expressed – the desire for life, liberty, and the pursuit of happiness.

For me, it all comes back to the people who I met in Ecuador. One particular guy who I met was living in secret. When I asked him what came next, he said “nothing.” He planned to eventually marry a woman and have children. He would be stuck living in the shadows, only able to dream of a different life in the US.

As a country, we should be proud that members of LGBT communities abroad look upon us in such a positive light. Let’s try to live up to that reputation, and support changes to our immigration system that will give long overdue equal rights to LGBT couples.