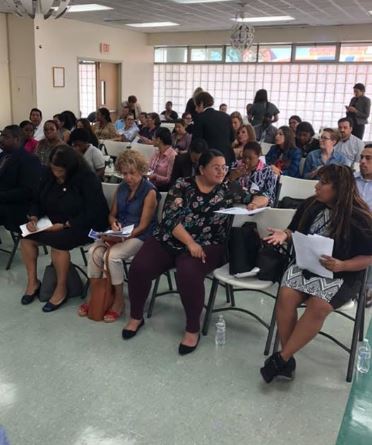 Representatives from dozens of organizations on Long Island met in Hempstead at the Economic Opportunity Commission headquarters to discuss the impact Trump’s new Public Charge rule is having on immigrant communities. Organized by the New York Immigration Coalition, the program included a basic orientation to the change in the immigration law.

The rule makes it harder for some immigrants who applying for permanent residence to get their “Green Card” if they have accepted cash benefits for a handful of Federal programs. DHS has expanded the list of identified programs that can be considered when applying the public charge “totality of the circumstances” test. Prior to the regulation becoming final, the agency could only consider receipt of three cash assistance programs—Supplemental Security Income (SSI), Temporary Assistance to Needy Families (TANF), and state general relief or general assistance—as well as a Medicaid program that covers institutionalization for long-term care. The final regulation adds five new programs: non-emergency Medicaid; Supplemental Nutrition and Assistance Program (SNAP, formerly food stamps); Section 8 Housing Choice Voucher Program; Section 8 Project-Based Rental Assistance; and Public Housing. Benefits received by the applicant’s U.S. citizens children or other family members are not considered in determining whether the applicant is likely to become a public charge. Benefits received by an individual who was not subject to the public charge ground of inadmissibility when the benefits were received are also not considered.

Participanting groups, which included churches, governmental agencies, and community-based organizations, said that there is a lot of confusion about the new rule. Immigrants are confused about who is covered by it. According to the New York Immigration Coalition’s Abbey Sussell, the new rule only applies to those seeking permanent residence who applied for adjustment of status after October 14, 2019. It does not apply to those seeking citizenship, those with DACA or TPS, and refugees and asylees.

The new rule also does not cover the receipt of free school lunches, benefits for the children of immigrants, and the popular WIC program.