An armed paramilitary group called the United Constitutional Patriots have begun “arresting” hundreds of Latinos, most of whom appear to be children, along the Southern border in New Mexico. These “arrests” are made without any authorization from Federal or state authorities and amount to little more than kidnapping.

The militia’s leader, who uses the fake name “Johnny Horton, Jr.” but whose real name is Larry Hopkins, wrote last Fall that he is “69 years old and i am going to the border when i know the enemy is close to the border, i am going to fight and i may give my life but at least i will be there and stand by my oath, they didnt get me when i was in the army and i will stand for our country, if they get me now at least i will die for our country and what keeping america free is all about, GOD WILL GUIDE AND PROTECT ME.”

The group posts its armed abductions of children and their parents and posts them on-line as part of its fundraising strategy. In  video posted two days ago, the group claimed to have captured 200-400 migrants. As you can see in these grainy screenshots, half of those abducted appear to be children.

The children are forced to kneel on the ground with militia fighters surrounding them. The militia woman recording the video can be heard making disparaging comments about them while she records the scene. At no point does she ask for permission to film the children and babies, some of whom are so young that they are carried by their mothers and fathers. 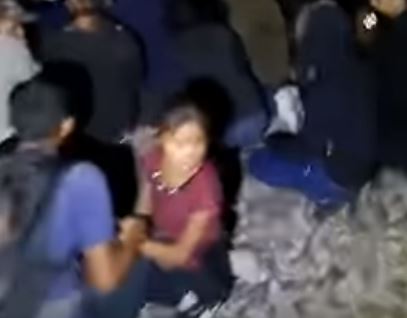 New Mexico’s Attorney General Hector Balderas has told the militia to cease its operation. He said that, “These individuals should not attempt to exercise authority reserved for law enforcement.” Gov. Michelle Lujan Grisham said that the militia group’s actions were  “completely unacceptable.”

The group claims that it is not doing anything illegal and says that the captured migrants are voluntarily cooperating with the militia fighters.

The United Constitutional Patriots mobilized their military presence at the border in response to Donald Trump’s call to block migrants at the border, according to the SPLC. Hopkins said last year that armed groups helping the migrants and refugees were already at the border and that they were “planning on flanking us … to shoot us.” In November, Hopkins claimed to have had a long-term relationship with Donald Trump and said that “intelligence” he was receiving was coming from sources “high-up.”

To get a glimpse of the delusional mindset of the militia, at approximately the 21 minute mark in the video below, the camerawoman notes how closely the adults stay with their children. To her this tells her that these are not really their children! It never occurs to her that the children (and the parents) who are surrounded by gun-wielding white people may simply be terrified and clinging to one another.