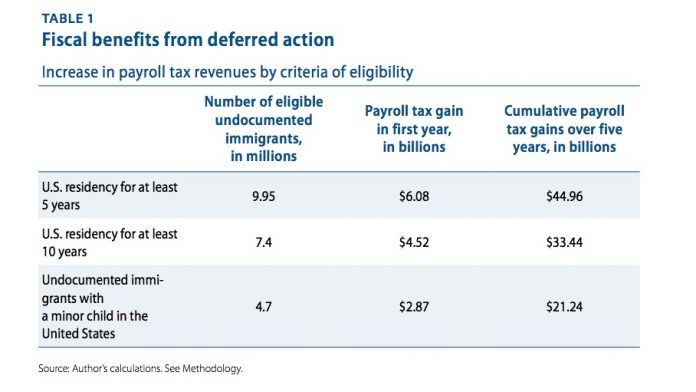 It has been widely speculated that President Barack Obama’s highly anticipated executive orders will include some kind of expanded deferred action program. Now, as Obama begins to backpedal on the timing of the executive orders, a new study from the Center for American Progress (CAP) reveals the extensive fiscal benefits such a program would offer the U.S. economy.

For starters, the study estimates that wages for undocumented workers would rise by 8.5 percent if they were given work permits. Moreover, it says, these gains would accrue immediately.

As a result of the rising wages and the boost in workers paying taxes, it is expected that U.S. would gain as much $6.08 billion in new revenue in the first year. Over five years, the benefits would increase to as much as $44.96 billion.

The figures were derived using a combination of historical data—including information gleaned from previous legalization programs such as the Immigration Reform and Control Act of 1986—and current disparities between undocumented and documented immigrant wages.

It is worth noting that another CAP study shows that legislative reform that includes a pathway to citizenship would result in even greater benefits—a 25 percent boost in earnings—which would result in additional tax contributions and even more economic growth. The permanent nature of such reform would create an incentive for immigrants to invest in their education, which would further boost wages. Other research has found that obtaining citizenship is associated with a 10 percent increase in earnings.