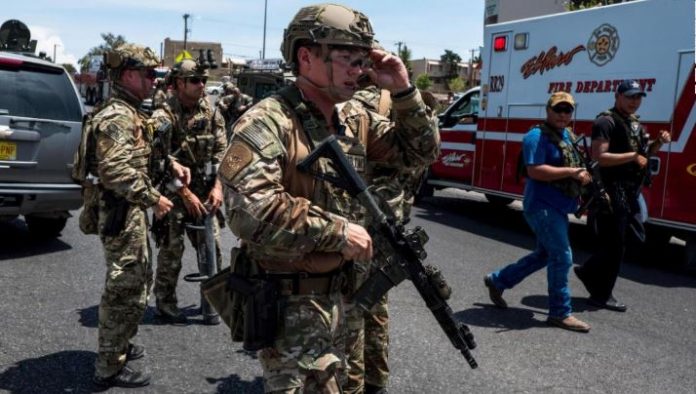 Patrick Crusius has been identified as the shooter who killed at least twenty people in El Paso, Texas today. Right-wing websites have published a “Manifesto” purportedly written by Crusius in which he says that his motive for the attack was political. Crusius, a 21 year old from Allen, Tx., reportedly wrote that he supported the mass killing of Muslims in Christchurch, New Zealand.

The putative manifesto says: “This attack is a response to the Hispanic invasion of Texas. They are the instigators, not me. I am simply defending my country from cultural and ethnic replacement brought on by an invasion.” The “manifesto” says it is motivated by a conspiracy theory called “The Great Replacement” which argues that non-white immigrants are steadily replacing whites in Europe and North America in order to destroy Western Civilization.

According to the “manifesto,” “America will soon become a one party-state. The Democrat party will own America and they know it. They have already begun the transition by pandering heavily to the Hispanic voting bloc in the first Democratic Debate. They intend to use open borders, free healthcare for illegals, citizenship, and more to enact a political coup by importing and then legalizing millions of new voters. With policies like these, the Hispanic support for Democrats will likely become nearly unanimous in the future. The heavy Hispanic population in Texas will make us a Democrat stronghold. Losing Texas and a few other states with heavy Hispanic population to the Democrats is all it would take for them to win nearly every presidential election.”

The “manifesto” also sounds the traditional racist alarm about “race mixing.” According to the document, “I am against race mixing because it destroys genetic diversity and creates identity problems. Also because it’s completely unnecessary and selfish. Second and third generation Hispanics form interracial unions at much higher rates than average. Yet another reason to send them back.”

Whether the manifesto is real is not yet known. What is known is that some on the far-right want to associate themselves with the mass killing and exploit it to spread violently racist and anti-immigrant views.