We all know that comprehensive immigration reform would have an enormous positive impact to our economy, as countless bipartisan and nonpartisan studies have shown.

Some opponents of immigration reform say that comprehensive immigration reform should only include legal status for the 11 million aspiring citizens living in the shadows. However, doing this would create a permanent underclass that cannot fully contribute to our economy.

According to a new report from the White House, providing an earned path to citizenship to our nation’s undocumented workers would boost U.S. GDP by $1.4 trillion, increase total income for all Americans by $791 billion, generate $184 billion in additional state and federal tax revenue from currently undocumented immigrants, and add about 2 million jobs to the U.S. economy, all within the first decade.

Compared to the benefits of citizenship, providing legal status alone to currently undocumented workers would, over 10 years, result in $568 billion less GDP, and $321 billion less total income. An estimated 820,000 fewer total jobs would be created, and federal and state governments would lose out on $75 billion in additional tax revenue according to outside estimates. 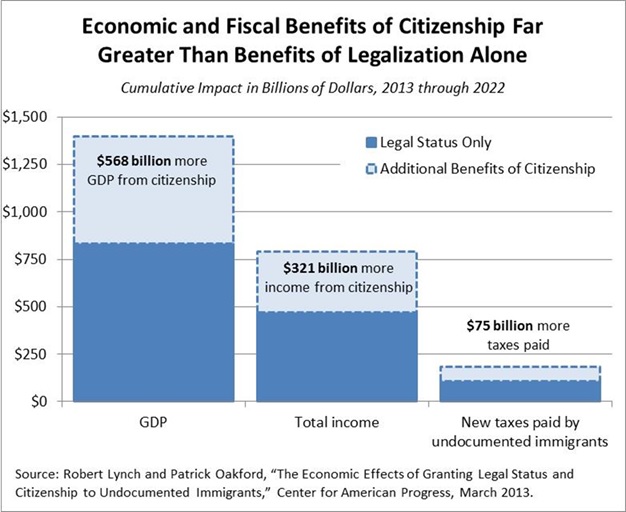 There are many reasons why citizenship provides even greater wage and economic benefits than legalization alone, including jobs and licenses people are only eligible for as citizens; jobs that require travel, which is often easier for those with U.S. passports; and citizenship serving as a signal to employers that a person means to stay in the U.S. for the long term.

The largest factor, however might be the greater certainty that accompanies citizenship, leading to more investment in areas such as education, training and housing, or more willingness to take the risk of starting a business.

A “legalization-only” approach violates a basic principle of our country: that anyone, no matter where they came from, can become an American citizen if they’re willing to work for it and take on the responsibilities of citizenship. We cannot afford a system that creates a group which can never become fully American, denying equal rights to people who pay the same taxes and play by the same rules even after they’ve paid a penalty and gotten on the right side of the law.

So when you speak to your local Representative during this recess, let them know that we need an earned path to citizenship for 11 million undocumented immigrants, not legal status.