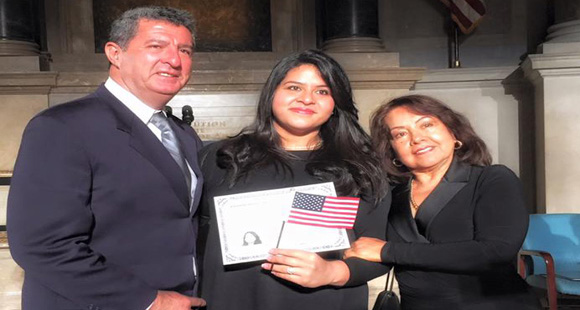 With tears in her eyes, she could not hide her emotion knowing that the day she was going to become a U.S. citizen had arrived.

Proudly, Lorella Praeli stood firmly while thousands of people congratulate her with applause. For her it was a dream come true. She could not believe it. After all, her pathway to citizenship has been a very long one.

But she realized her dream was really happening while she was listening to presidential candidate Hillary Clinton speak at the National Integration Immigrant Conference calling all immigrants to follow her example. Praeli began working this year as the Director for Latino Outreach for Clinton’s campaign.

“I don’t really have words to describe it,” said Lorella in an interview with Long Island Wins.

Lorella was born in Peru. She lost her right leg as a result of a car accident when she was two years old. Concerned about Lorella’s future, her parents decided to come to the U.S. with Lorella and her sister. They knew here she would have better access to healthcare and better opportunities. 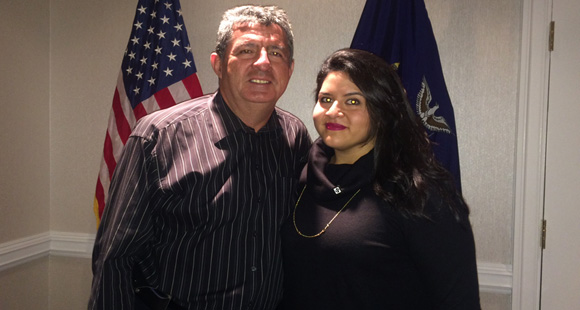 LORELLA AND HER FATHER MANOLO AT THE NIIC. (PHOTO: LIW).

Yet, there was another issue Lorella will have to face. She found out she was undocumented when she applied for college and tried to get financial aid. However, Lorella went to Quinnipiac University thanks to a scholarship and graduated with a degree in Political Science and Sociology. She was undocumented until 2012 when she became eligible for DACA, a program instituted by President Obama, which protects young students from deportation.

“She was convinced that this was her country, and that she had something special to offer. So she came forward, publicly, as undocumented,” Clinton said in her speech.

Before being hired by Clinton, she was an immigration activist known across the country for her work at United We Dream, an organization that advocates for immigrant rights, especially the undocumented.

Her job consisted of developing political strategies to fight for immigration reform, the Federal Dream Act, and the implementation of DACA.

“I think it is important that families continue to share their stories because they are shaping the national narrative of the debate and more people need to know that 11 million undocumented Americans are here and contributing and are hard working and they are our neighbors, our family, our friends, our colleagues,” she said.

DACA protects undocumented young people from deportation, allowing them to obtain a temporary work authorization and a drivers’ license. However, Lorella became a naturalized citizen after she got married to a U.S. citizen. 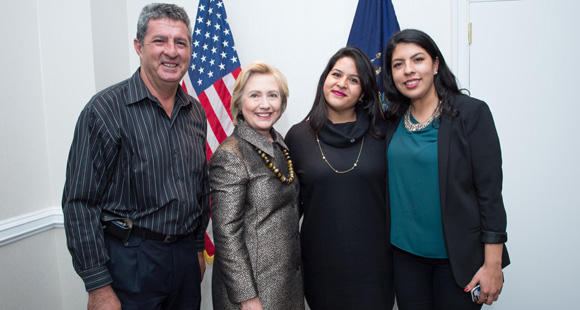 Lorella shared a message for all immigrants, but especially for millions of undocumented people living in the country.

“I feel that I remember so much of what my family went through and I also feel a great sense of responsibility and desire for other people to experience what I am going through,” Praeli said.