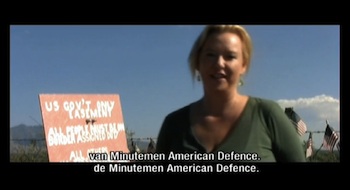 Earlier this week, former militia leader Shawna Forde was sentenced to death for the May 2009 murders of Raul Flores and his 9-year-old daughter, Brisenia, in Arivaca, Arizona.

As a militia leader, Forde was already the focus of media attention before the crimes, and in October 2008, Belgian filmmaker Sebastien Wielemans interviewed her regarding her views on the border.

Wielemans picked up the story after she was charged in the killings, and the resultant short documentary, “A Cycle of Fences,” offers a glimpse into Forde’s personal life, and how those around her reacted to the news of her arrest.