Scroll down for all The Immigrants’ Civil War articles.

When the first Union Navy ships reached Confederate New Orleans on April 25, 1862, they were met with an unexpected greeting. Hundreds of civilians had gathered to welcome them to the city.

The welcome, however, soon turned to bloodshed. As the Union sailors watched helplessly, Confederate partisans on land opened fire on the unarmed crowd. A captured Confederate soldier later questioned by a Union officer said that “some 15 or 20 Germans were shot down on the levee” because Confederates were incensed by “Union expressions on the part of the foreign population of New Orleans.”1

A few weeks later, a reporter for The New York Times visited New Orleans after Union troops had ended Confederate massacres of civilians. He interviewed an Irish immigrant who told of hardships under the Confederate rule: “Divil a bit of money have I seen for a year, and Confederate scrip [money] has brought the wife and children to starvation almost,” the immigrant said.

Overjoyed at the Union victory, the man shouted; “Hurrah for the ould flag! They wanted to make me fight against it, but I never have fought and I never will fit for ‘em.”2

The same reporter worked his way through Union-occupied New Orleans and encountered what at first seemed an extraordinary sight:

“Here and there we could see Zouaves [soldiers in Algerian-style uniforms] in their picturesque dress, posted as sentinels upon the wharves. At first I did not understand why Southern soldiers should be permitted to bear arms after the city was in our power, but it was subsequently explained. These men belonged to the Home Guard, an organization composed exclusively of the foreign population of the city, who had chosen a neutral position on the war question, and were acting as a police for the protection of property from the lawlessness of the rabble.”3

The Irish made up 14 percent of New Orleans population and German immigrants made up 12 percent more. Both groups had suffered violently under the city’s Know Nothing government and were disaffected when Louisiana became part of the Confederacy. Their resistance to Confederate rule may have helped hand the city over to the Union, and their cooperation with the federal government would help secure this one small spot of Blue in a land of Confederate Gray for the Union. They would not just help end Confederate terrorism in the city, they would play a role in expanding Union control in the Deep South.4

The first immigrants to support the Union were the very Confederate soldiers whose mutiny at Fort Jackson against their nativist officers had handed over New Orleans to the opposing force. Two hundred of the Fort Jackson Confederates, almost a third of the total, switched sides and took the oath of loyalty to the United States. These men were quickly put to work preparing the city’s defenses against a Confederate counterattack.

Just days after the Crescent City was captured, the Union 8th Vermont Regiment announced it would enroll New Orleans men as soldiers to replace its losses. Only one native Southerner signed up, but 6 French immigrants, 5 Germans, and one Swiss immigrant quickly joined the regiment. Over the coming months hundreds of men from the city joined the Union army. Seventy-eight percent of New Orleans recruits were foreign born. Thirty-two percent were Irish, 31 percent German, and 15 percent came from other countries. One Confederate woman lamented that “nearly all the Dutch or Germans…have turned against us.”5 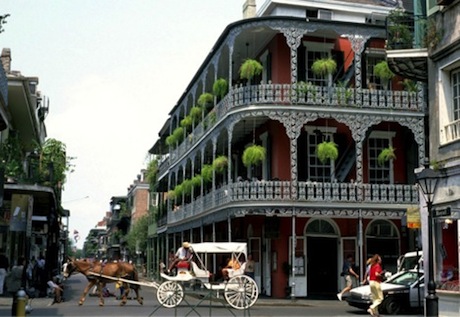 In 1862, New Orleans was the sixth largest city in the United States and first largest in the Confederacy with almost 170,000 people. The next largest Confederate city was Charleston with only 40,000.

Twenty-one year old Albert Krause was part of the Union army of occupation. He had immigrated to America the year the war began. When the war broke out, Krause quickly enlisted in a mostly German regiment from Buffalo, New York. He disregarded advice that he return to Germany saying, “I have tasted freedom and it tasted too good to trade it for a dungeon…Long live freedom!”6

Krause observed that in Louisiana, “Almost all the citizens are …devoted to the South…Everywhere I went…people stared at me in my Yankee-soldier uniform with hostile wary eyes.” The one group that was sympathetic was the mostly-immigrant “proletarians” of New Orleans. “The proletarians…favor the North,” he wrote. “These people,” he said, “have suffered terribly under the rule of the South.”7

Part of the explanation for immigrant support for the Union occupation was disaffection with the Confederacy. Another part, though, was the political brilliance of the man Abraham Lincoln sent to run New Orleans. In coming weeks we’ll look at how General Ben Butler won The Immigrants’ Civil War in New Orleans for the Union.8

You may also want to read the first article in our New Orleans series: Did Immigrants Hand New Orleans Over to the Union Army?

1. Mutiny at Fort Jackson: The Untold Story of the Fall of New Orleans by Michael D. Pierson, University of North Carolina Press (2008) pp. 2-4.

2. The New York Times, “OUR EXPEDITIONARY CORRESPONDENCE.; A Visit to New-Orleans Incidents of a Trip Up the River Union Demonstrations from the Shores Appearance of the city Its In habitants Movements of the Squadron. NEW-ORLEANS AND THE GULF,”published May 22, 1862.

3. The New York Times, “OUR EXPEDITIONARY CORRESPONDENCE.; A Visit to New-Orleans Incidents of a Trip Up the River Union Demonstrations from the Shores Appearance of the city Its In habitants Movements of the Squadron. NEW-ORLEANS AND THE GULF,”published May 22, 1862.

4. Mutiny at Fort Jackson: The Untold Story of the Fall of New Orleans by Michael D. Pierson, University of North Carolina Press (2008) p. 89.

6. Germans in the Civil War: The Letters They Wrote Home edited by Walter Kamphoefner and Wolfgang Helbich, University of North Carolina Press (2006) p. 198, 204.

7. Germans in the Civil War: The Letters They Wrote Home edited by Walter Kamphoefner and Wolfgang Helbich, University of North Carolina Press (2006) p. 198, 204.

8. When the Devil Came Down to Dixie: Ben Butler in New Orleans by Chester G. Hearn, Louisiana State University Press (1997);  “’The Unmeaning Twaddle About Order 28’: Benjamin Butler and Confederate Women in Occupied New Orleans, 1862” by Jacqueline Campbell in The Journal of the Civil War Era Vol. 2, No. 1, March 2012.